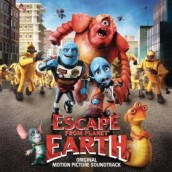 Aaron Zigman blasts off with his zaniest, and best score for a toon sci-fi'er

Though he’s most often called up to be the go-to guy for terrestrial chick flicks, Aaron Zigman’s gorgeous, sumptuously orchestral score for the goblins running across the BRIDGE TO TEREBITHIA showed the composer’s more fantastical stylings were just waiting to take flight. It’s finally taken his first foray into animation to unleash Zigman’s inner John Williams, not to mention Carl Stalling, James Horner and a host of other wonderful stylistic diversions to create his best score yet for ESCAPE FROM PLANET EARTH.

Full of enough good humored, full-blast military patriotism to launch an Apollo Mission to the Looney Tunes planet, Zigman’s intrepid alien traveler ends up trying to make a great escape out of Area 13, leading to any number of breathless action set pieces- all performed with kid’s cartoon-friendly brightness. Amidst the symphonic and choral heroics, Zigman indulges in Bond-ian excitement, psychedelic rock, big band swing, gleeful 50s sci-fi stereotypes and even Klezmer music. But where these kind of stylistic swings have given lesser scores for the genre ADD, Zigman’s got great thematic glue to keep the high fructose energy in place, resulting in a melodically well-constructed work with a real feeling to it. Like Alexandre Desplat’s similarly exciting animated score to RISE OF THE GUARDIANS, ESCAPE FROM PLANET EARTH  soars with the delight of a composer really getting to go for it, here blasting far above the orbit of lovelorn ladies to show he’s got the right stuff for far bigger voyages.