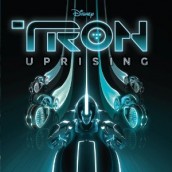 Oft times when the next-big-thing techno / pop artist is brought in to “score” a film, it’s usually a relatively uncredited composer who makes matters musical, not to mention score-like. So if you’re judging by how electrifying Joseph Trapanese’s cue collection from TRON UPRISING from this CGI toon spin-off of Disney’s TRON LEGACY is, then it’s likely you’ll regard him as the real Flynn of this soundtrack grid.

Trapanese and Daft Punk evolved Wendy Carlos’ already Avant-garde approach for the original TRON to the next, 21st century level by mixing a monolithic orchestra over state-of-the-art trance and techno club beats, putting a cold, rhythmic grandness into the OCP’s domain.

While not importing any of LEGACY‘s themes per say into TRON‘s new TV platform, Trapanese has made the sound of that zillion-dollar feature even bigger and better. The musical world behind Flynn’s Arcade is certainly more perilous, and empathetic with its symphonic rage against the machine. More than then ever, these programs have an emotional soul, from their strings to the haunting use of a human voice. But above all,

TRON is about throbbing, digital pulses that paint its neon-colored computer world in mesmerizing, exciting shades of atmosphere and action, the album’s rhythms ending up on the rapid-beat glo-stick stage with remixes by Opiuo and David Hiller. Trapenese’s UPRISING is a defiant answer to the usual thought process that big-sounding scores have got to sound smaller when taken to the cartoon medium of kid’s. If anything, this composer treats it like the most exhilaratingly musical light cycle race yet.

Clink on the link to buy the TRON UPRISING soundtrack