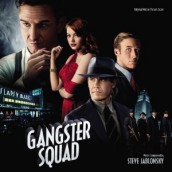 Take a composer whose good guys are out to bust metal heads, then throw him into the late 40s Los Angeles. Chances are you’re not going to get a score like CHINATOWN, which is exactly the point of hiring one of Hollywood’s big rhythmic guns to musically envision a rogue LA sheriff’s department as Autobots pitted against the Decepticon mob goons of Mickey Cohen in the new film GANGSTER SQUAD. While film noir purists might cry foul at a score that fits nicely into Jablonsky’s TRANSFORMERS cannon as opposed to Jerry Goldsmith’s,

Michael Bay’s go-to musician has accomplished his mission of hipping up old school crime fighters with the darkly propulsive sound of today’s multiplex action scoring, which most often reflects heroes who are often one shade away from being as villainous as what they’re fighting. GANGSTER SQUAD spills over with suspenseful intensity, showing the City of Angels as suffocating under a cloud of ominous, orchestral evil, strings samples and a subtle rock guitar relentlessly ticking away like a time bomb until the next propulsive gunfight occurs with blasting, bad-ass heroism. But while there’s no Goldsmithian crime jazz to be found in Jablonsky’s action dojo, the spirit of Morricone’s THE UNTOUCHABLES is heard in dulcimers, a harmonica and end-title trumpet that further send the film’s archetypes back to the old west days of sheriff versus outlaw, a nice musical touch that salutes the classic gang-busting movie that this SQUAD aspires to be.

Clink on the link to buy the GANGSTER SQUAD soundtrack