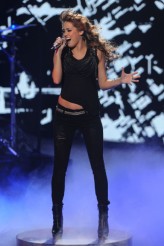 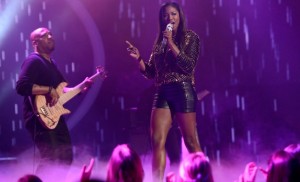 They finally are giving us something new on the world’s greatest karaoke competition, AMERICAN IDOL, in classic rock night.

Finally, after slugging our way through yet another rotten Beatles night and other bad themes, this is something I think most everyone can get behind. But even though they could compress the show into one hour, we still have two hours of TV to sit through meaning lots of filler, which I will not be going into here.

But let’s get to the performances.

Why I love the fact that there will be no ballads at all during the show since IDOL is famous for giving us so many in a night you don’t need that extra brandy to get you to lullaby, Burnell’s “You Give Love a Bad Name” by Bon Jovi was probably way out of his comfort zone. It showed as he was so out of his element and uncomfortable. Obviously, he’s more R&B but on this show you gotta do what you gotta do. It wasn’t a pleasant way to start the show. Urban called him uncomfortable. Minaj thought he should have done more R&B type singing. Jackson actually gave him some constructive advice in terms of learning from the singing. Carey said something but I couldn’t interpret it. Grade: C

A slightly country version of Janis Joplin’s “Piece of My Heart” is what we got from Kree tonight and what they said to Burnell is exactly what Kree did – made the classic rock song play to her strengths as a country singer. It was pretty good. Nothing mind blowing and nothing like she has done so far on the show but it will keep her on the show for the next week for sure. Jackson said she rocked the stage. Carey said something but again no interpreter. Urban asked about her boots. Minaj called if magnificent. Grade: B-

The second country lass in the competition did pretty much what Kree managed to do with “You May Be Right” by Billy Joel in turning a rock song into a country rock song. It worked and I think that Janelle might be getting an edge up on Kree even if the judges are all over Kree in terms of their comments. Janelle showed that not only can she handle the fast songs but she can be one hell of a performer when she wants to be. It was a good pick of song and well done. Urban again commented on boots. Minaj called the performance incredible and said she’s relatable. Jackson called her the great contender. Carey babbled about and I have no idea what she was saying. Grade: B

How in the name of God is this dude still on this show? He can barely remember any lyrics week after week. He botched his duet with Angie Miller and then mumbled his way through “We are the Champions” by Queen. I guess some people out there are voting for him because he is so bad? I don’t get it. This was yet another disaster. How he even was moved into the Top 20 is crazy, he should have been cut during the auditions. Probably doesn’t matter how he sings at this point because his fans or people wanting him to continue will vote for him. Minaj called it a Hispanic tease. Jackson thought he did a good job. Carey said nothing really. Urban loved his finish to the song. Grade: D

Not that Candice needs any good lead-in but you can’t get better than following Lazaro on stage. She performed “I Can’t Get No Satisfaction” by Rolling Stones and proved once again, this chick has what it takes to do pretty much anything in the song book. She’s a lock to continue to the next round. Carey talked about her songs or something. Urban loved it. Minaj said she fell asleep during the song but loves her voice. Jackson thought it was ok but not her best. Carey said something but sorry no interpreter.

Amber comes out singing the oft-performed “What About Love” by Heart and it is not really an up-tempo version. Hey, I thought they said no ballads? OK, this isn’t a ballad but it is as close to one we have had at this point. Still Amber looks great and her voice is pretty damn good and she should stick around for one more week. Urban loved her shoes – damn man, you have a fetish don’t you? Minaj called her striking and the performance striking. Jackson loves her legs. Carey wants America to vote for her. Grade: B

Not sure if this actually qualifies as classic rock but I guess it is old enough for most of the viewing audience. But Angie doing “Bring Me to Life” by Evanescence is like an awesome thing to behold as it is perfect for her voice and range. Yeah, the IDOL producers stacked the deck against the men this year but who cares when you have someone like Angie who looks like a rock star and sounds like one? Plus, Angie in hot pants – yes, please! Minaj liked the song choice. Jackson thought it was an amazing job. Carey once again said something but who knows what she meant. Urban wants her to be less theatrical but loved what she did. Grade: B+

So who will be in the bottom? I think we lose another dude this week as it will be Burnell Taylor, Larazo Arbos and probably Amber Holcomb because fans don’t seem to like her as much as the others. I think Burnell goes home. Who do you think will go home?

FEAR THE WALKING DEAD: Lorenzo James Henrie on Season 1 - Exclusive In...
DORKING OUT - Episode 34: The Legion Of Love Edition
New 4K, Blu-ray, DVD and Digital Releases for 1/23
Movie Review: US