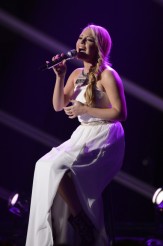 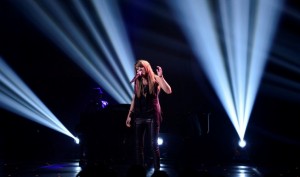 It was a mild shocker on the elimination of Curtis Finch Jr. last week on the world’s greatest karaoke competition, AMERICAN IDOL. But after the women kicked the crap out of the men in the first round, it wasn’t that much of a surprise to see a dude go.

So it’s week 2 and nine karaoke kids are left singing for America’s vote. And guess what, it is Beatles night … again …sigh. Can I just let out the collective groan among every freaking American (or at least half of those that are watching this year since ratings are so down) that has had to endure this terrible night year after year? How about something new and original IDOL? We’ve seen Beatles night every freaking year for God’s sake!

Kree was in the Top 3 last week (although they don’t announce who was the top performer) and deservedly so. This week she sang the Beatles’ “Had a Little Help From My Friends” and did a pretty good job showing why she was in the Top 3 again. Not sure if I would have gone with the all black look as, yes it’s flattering, but here it just seemed all wrong. Probably won’t matter as she will be safe this week. Urban loved she kept the song her own. Minaj basically said the same thing. Jackson thought it was the bomb. Carey told everyone to vote for Kree. Grade: B

Burnell placed in seventh place in last week’s voting. Not the best place to be and considering you are the best male singer this year, that’s not a good omen at all. His version of “Let it Be” lacked serious emotions and serious passion. You should be screaming this from the rooftops not smiling and generating the same tone the entire song. Not a good way to move up the rankings, my friend. Minaj said he didn’t sing the song but was too delicate with it. Jackson said he made it his own. What? It was terrible. Carey thought it was good for some reason as well. Urban likes his tone but never really said anything about the song. Grade: C

Holy cow, Amber looking amazing tonight. For some strange reason, Amber was fifth overall in the results last week. That’s crazy talk. This chick is Top 3 or Top 4 at least. She did “She’s Leaving Home” this week and once again had a great accompaniment to go along with what was a solid performance. She didn’t knock it out of the park as Jimmy Iovine said but it was definitely wasn’t bad.  Jackson didn’t like it at first but loved how it finished up. Carey didn’t know this Beatles song and then asks the same question Jackson asked. Urban said she made a 43-year old song sound fresh and holy sh** Urban says his first meaningful comment of the season right then and there. Minaj thought she was walking through the song and wanted her to put in the effort every time. Grade: B-

For some unexplainable reason, the terrible performance Lazaro put in last week landed him in fourth place overall. Last week he was a mess and this week he is singing “My Life” and is yet another contestant that has never heard the song he is singing. Hey IDOL, maybe it’s time you figure out that the population is MOVING ON from the Beatles and kids these days don’t know the material you are giving them and maybe a modern song would be a better fit??? Sorry, but this was again a disaster. If he places high again this week, not sure what is going on and what voting bloc is coming to his side (Hispanic maybe?). Carey given the chance to finally go first, blabbers on about his bravery and then gently comments on the bad arrangement. Urban says the key he chose was all wrong. Minaj says he is lacking confidence. Jackson said it was his worst performance ever. Grade: C-

Candice was in the Top 3 last week, again deservedly so, and I expect her to be right back in there this week with her great performance of “Come Together.” Not only is it a song that everyone can relate to and probably everyone knows, they took a nice hard rock edge to it while allowing her to use that huge voice of hers. By far and away the best so far. Urban loved to see a new side of her on stage and her performance was great. Minaj liked it but wants more attitude in her face. Jackson called her voice crazy. Carey said she can go even further with her voice but loved the whole performance. Grade: A-

I haven’t been a big fan of Paul so far this season because he just hasn’t delivered very good, well, anything up until singing “Eleanor Rigby” during Beatles week. It was pretty good. I really liked the strings on the floor and the fog spewing from the deck and all that crazy song performance stuff. His vocals were decent but having the right song, which he has here, is sometimes more important than the singing and it was at least enjoyable. Minaj called it bland and forgettable and didn’t like it. Jackson thought he never really got into the performance from the beginning. Carey really didn’t say much about the performance. Urban liked some of the parts in the middle and enjoyed the pop rock parts. Grade: B

Angie was the third member of the Top 3 performers (remember they didn’t rank them) and it’s obvious as to why. She may have the best voice in the competition. She once again showed what she could do with the classic “Yesterday” and really destroyed it, in a good way. It seemed almost too easy for her which is scary. She should be in the Top 3 again. Jackson calls her one of his favorites and it was as stellar performance. Carey said she did the respectful version of the song yet she showed her voice. Urban said she can sing anything the way she wants and get away with it. Minaj said it was unbelievably amazing. Grade: A-

Honestly, I was completely bored watching Devin perform “Long and Winding Road.” It was one of those performances where instead of watching the song I actually hopped on the Internet and started doing stuff and then snapped back into place thinking I should be watching it. It was just lacking any passion whatsoever. Carey said he sings all sorts of good stuff and continues to do it. Urban wants more emotion in his performance. Minaj disagreed saying that he was emotionally committed but first said she liked the background singers. Jackson said he is back tonight. Grade: C

Janelle completes what has once again been a complete domination of the women over the men in week 2 with a country version of the Beatles’ “I Will.” The judges often talk about turning a song into their own product of how they would make a record. Janelle did it in spades here and shows why all the country fans out there are voting for her (she placed fifth last week). Don’t expect her to go anywhere soon. Urban called her pure and true. Minaj called her great. Jackson said Janelle is back tonight and was one of the best of the night. Carey said she gave a beautiful and elegant performance. Grade: B+

So who will go into the bottom this week? I think it will be Lazaro Arbos, Burnell Taylor and Paul Jolly with Lazaro going home. Who do you think will go home?