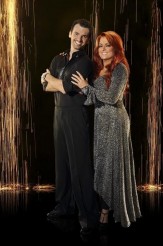 Tonight’s DANCING WITH THE STARS results show reminds us of how hard it really can be to say goodbye. Wynonna Judd & Tony Dovolani, sadly, have left the competition. Voted out second, Judd & Dovolani weren’t even in the bottom two last week but low scores this week placed them in last place. Sometimes, it just seems some go way before their time. This is definitely a case of a premature exit.

Still, before the somber departure came some highlights and then the announcement of the Twitter fans’ pick for King and Queen of the Prom: Zendaya Coleman and Jacoby Jones, gaining each an additional two points to their scores which easily made them safe to dance again, along with their partners Val Chmerkovskiy and Karina Smirnoff.

In a nostalgic turn, Huey Lewis & The News performed “The Heart of Rock and Roll”, ahhhh…the memories that song brings back. Then, the judges picked Sean Lowe & Peta Murgatroyd for the encore with special guest Bruno Tonioli. Tonioli got to vamp on the floor with his guy-crush Lowe. Clearly, he enjoyed himself more than anybody.

Thirdly, Kellie Pickler & Derek Hough were called out safe as was a once again very surprised D.L. Hughley & Cheryl Burke. The fans must really like him. Hell, if the judges don’t give him any love the fans seem to have no problem throwing some affection his way. Season 16 pros treated us to a number ala WEST SIDE STORY before a recap preceded the fifth safe couple Lowe & Murgatroyd and then the sixth safe duo Victor Ortiz & Lindsay Arnold.  In jeopardy were Lisa Vanderpump & Gleb Savchenko along with Andy Dick & Sharna Burgess.

A debating video on whether it is harder for the male celebs or females celebs to learn the moves pointed out the fact that the woman have scored higher than the men but that the men have won more than the women, but only by one season: 8-7. So what does that conclude? Nothing. It all just depends on who you talk too, I suppose.

The apparently mandatory Macy’s Stars of Dance  performed in a prerecorded number; again, as I have said in the past, this is not my favorite part of the show before Demi Lovato returned to sing a song from her new CD “Heart Attack”.

Soon, we learned that Aly Raisman & Mark Ballas were safe and so were Ingo Rademacher & Kym Johnson. Vanderpump & Savchenko were the ninth to be safe before Judd & Dovolani, standing next to Dick & Burgess, were eliminated. A sad goodbye, indeed. Dovolani won last season with Melissa Rycroft and now he leaves so soon with an obviously broken hearted Judd. Ah, well, the show must go on! Stay tuned!