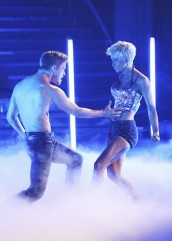 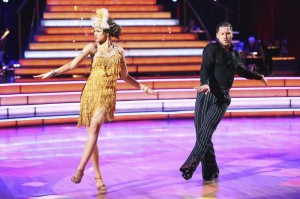 After some of the lowest ratings ever to hit the high rated DANCING WITH THE STARS last all star season, I guess they figured people actually want to see people who can’t dance. So, here you go…voila – season 16. But, be careful what you wish for. Some of the scores are pretty low and some of the dancing is pretty…well, let’s just say there ain’t anything pretty about it. Then again, three stars have shot their way to the top.

Disney star Zendaya Coleman, who with Valentin Chmerkovskiy, is holding rank at number one, Kellie Pickler and Derek Hough are at number two and Aly Raisman and Mark Ballas round off the top three. Beyond those three the rest are struggling and coming up short thus far, save Dorothy Hamill, with Tristan MacManus, who had a great week last week but with a cyst issue this week couldn’t really perform very well at all.

There is a few in the middle, Ingo Rademacher with Kym Johnson, Jacoby Jones and partner Karina Smirnoff and Sean Lowe with Peta Murgatroyd are all wallowing in mediocrity.  Then, there are the others who are barely able to keep their heads above water – Andy Dick and Sharna Burgess, Lisa Vanderpump and Gleb Savchenko, Victor Ortiz and Lindsay Arnold and Wynonna Judd and reigning champ Tony Dovolani, who isn’t likely to have a repeat of last season. Still, it’s all good entertainment, I think.

Wynonna Judd (Singer) and her partner Tony Dovolani
It was a nice effort. Goodman said her Quickstep was too slow. Tonioli said it started well and Inaba thought it was moving in the right direction.
Scores: Inaba – 6, Goodman – 6, Tonioli – 6, Harland – 6

Ingo Rademacher(Actor) and his partner Kym Johnson
The performer in him really came out! Goodman called him Bingo Ingo! Inaba said his frame was a little off. Tonioli thought he had spirit in his Quickstep.
Scores: Inaba – 6, Goodman – 7, Tonioli – 7,  Harland – 7

Lisa Vanderpump (Reality TV Star) and her partner Gleb Savchenko
She was just unable to do it. Goodman agreed, saying it never took off. Inaba told her to let loose. Tonioli said she needed to contain herself in the Jive.
Scores: Inaba – 6, Goodman –6, Tonioli – 6, Harland – 6

Victor Ortiz (Boxer) and his partner Lindsay Arnold
He was a little discombobulated in his movements. Goodman called his Jive scruffy. Inaba said it was on the right track. Tonioli called it a runaway train.
Scores: Inaba – 6, Goodman – 6, Tonioli – 6, Harland – 6

D.L. Hughley (Actor)and his partner Cheryl Burke
He danced more in the first few seconds of his Quickstep than in all of his Cha Cha Cha last week. Goodman told him he improved. Inaba said she saw all the hard work he put in. Tonioli said he did a good job.
Scores: Inaba – 5, Goodman – 5, Tonioli – 6, Harland – 6

Kellie Pickler (Singer) and her partner Derek Hough
My favorite of the night! Goodman said she was on fire in her Jazz routine. Inaba called her a dancer! Tonioli said she was a smash hit.
Scores: Inaba – 9, Goodman – 8, Tonioli – 9, Harland – 9

Zendaya Coleman (Actress)and her partner Valentin Chmerkovskiy
She has the speed but needs a little refinement. Goodman called her Jive fantastic. Inaba said she is the whole shabang. Tonioli said a star is born.
Scores: Inaba – 9, Goodman – 8, Tonioli – 9, Harland – 8

Dorothy Hamill (Olympian) and her partner Tristan MacManus
Poor, poor Dorothy, with an injury this week her Jive just didn’t cut it. Goodman called it a mess. Tonioli said there were just too many mistakes. Inaba thought fear was holding her back.
Scores: Inaba – 5, Goodman – 5, Tonioli – 5, Harland – 6

Who’s going home: If  it’s not Hughley, it could be a number of people, possibly Vanderpump.
Who Has Legs To Take Home The Mirror Ball: It’s a three woman race right now between Coleman, Raisman and Pickler. Stay tuned!