An explosive episode of the series 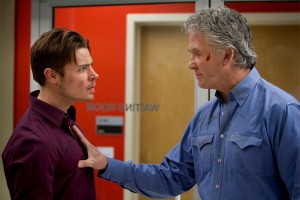 Explosive is more than one way to describe this week’s DALLAS episode “Guilt and Innocence.” Relationships implode while Ewing Enterprises is severely damaged by the destruction that almost cost the lives of many and put the lives of Pamela’s (Julie Gonzalo) and Christopher’s (Jesse Metcalfe) babies in harm’s way. Oh, but that isn’t half of it.

The drama heats up between Harris (Mitch Pileggi) and his mother (Judith Light) who is in the hospital as well after a fall on the stairs – she broke her leg. She blames Harris and he begs her forgiveness, likely only to save his hyde. Ooooh to see Light and Pileggi go head to head is a treat. Both are so conniving and cutthroat as they continue to one up each other for control. Light is a surprising delight as a Mommie Dearest type, who would have thought she had that in her?

New characters are brought in ever so subtly while old faces return. Pamela’s mom resurfaces (Audrey Landers) to check on her condition while Lee Majors makes a guest star appearance as an old collegue of Sue Ellen’s (Linda Gray). T

he producers are not too eager to force new faces down our throats, instead they are brought in as needed. DALLAS, which is considered a prime time soap opera has the umph and drama of a soap without the cheekiness that tends to go hand in hand with day time serials. The show isn’t just based on who is in bed with whom or who the father of said baby produced during that consummation is. Although, there is a little of that too, this show is so much more. The dialogue is above par for any show and the acting is just right.

In fact, Metcalfe finally gets to show his acting chops this episode with some well done method crying. He proves he is more than just a pretty face, which is all we ever saw from him on DESPERATE HOUSEWIVES.

Still, one hour is not enough. We are left in limbo as to the fate of the babies; where Harris’ mother is suddenly being shipped off to and the investigation into the explosion, after most believed it to be a mistake by Christopher, they now are convinced that Cliff Barnes had something to do with it. And boy are they right about that! The plot thickens!