Home » dallas review let me in 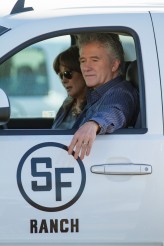 The series wallows in the past 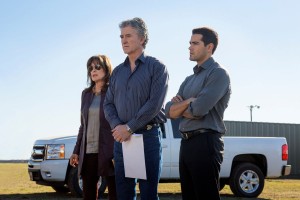 It’s the Ewings vs. Barnes and it is on! High voltage surrounds the Ewing family as Cliff Barnes (Ken Kercheval) hooks up with Harris Ryland (Mitch Pileggi) to take down the family. I don’t know how these people sleep at night! The stress, the tragedies, the hysteria — it’s enough to put you in a loony bin! Still, without the drama we wouldn’t have the intrigue that the show so masterfully brings to us week after week. This week, however, seemed redundant which weakened the episode a bit.

But the big revelation that Christopher’s (Jesse Metcalfe) and Pamela’s (Julie Gonzalo) babies did in fact die was a shocker. Somehow, it seemed they would miraculously make it through. Sadly, the explosion created by her own father killed her babies and her big leverage on Christopher imploded as well. Beyond that news, the episode just rehashed old story lines, including the now estranged relationship between Ryland and his daughter Emma (Emma Bell). We get it. She doesn’t want daddy controlling her so we don’t have to keep seeing him show up wherever she is at begging or rather trying to manipulate her back into his life.

The Ewings, however have bigger fish to fry right now. In a collective effort, Barnes and Ryland have high ranking officials in their pockets. And with those guys fronting them it will be very difficult to get Ewing Energies out the hole that it now is in.

The Ewings are slowly unraveling little by little while each is put under the pressure of salvaging Ewing Enterprises. The actors aren’t just mugging for the camera though. Each gives a heartfelt performance week after week which engages us into a make believe world which at times seems almost too unbelievable and yet we can’t wait to see what happens next. Bringing on Lee Majors, who struggles between both Barnes and the Ewings, is an  interesting choice, especially in such a convoluted role. We haven’t seen him, like others re-emerging in the series, in a long time. It’s like seeing an old friend again.

Barnes, never a friend of the Ewings, has waged war on them and brought along some heavy hitters to do his bidding. Let’s just hope next week we get to see more than the same old from week’s past. We are waiting for more. Bring it on!