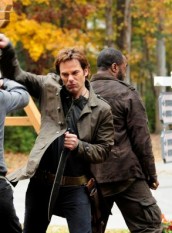 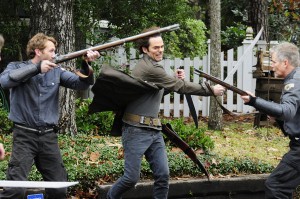 So REVOLUTION pulled April Fool’s a week early last week. The entire first half of the season was dedicated to finding Charlie’s (Tracy Spirdakos) captured brother, Danny (Graham Rogers), only to kill him off in the opening episode of the second half of the season. Eliminating the entire purpose of the show up until this point.

April Fool’s! Sorry fans it was all just a bad joke.

Of course, some people might point out this is a way to restart the series in order to get it back on track to be something of a decent show that it has the promise to be. Of course, there could be a thousand other ways to do this but at least this removes one obstacle from what was a milquetoast first half of the season.

So with this fresh start, where does the show go from here?

Well, it was more of the same in “Ghost” with the whole Monroe Militia versus the rebel alliance fighting them. On one hand we had Miles (Billy Burke) and Nora (Daniella Alonso) searching for yet another lost member of Miles’ past that is a keen fighter in order to rally the forces behind Monroe (David Lyons). That resulted in a pretty brutal street fight where Miles, Nora and Jim Hudson (the bad ass killer) having to face off against some 20 militia and defeating them with swords. Weird that a kill squad wouldn’t have the automatic machine guns the other members of the militia have but whatever.

On the other hand, the militia tracks the alliance to a hospital where Rachel (Elizabeth Mitchell), Aaron (Zak Orth) and Charlie are stationed with Randall leading the charge to capture Rachel in order to fuel his desire to create a new world order with Monroe’s army at the forefront. We get to see a little bit of the new fighting mad Charlie take on a number of Monroe bad guys and fight against her mother and then mend fences a bit.

Other than that we got a bit more behind why the power went off in the first place, which really is the only interesting thing that is going on with this series from the get-go. Apparently, Randall lost his son in the war in Afghanistan so in order to protect other men from dying he sped up the project Rachel and others were working on to wipe out power in certain parts of that country to end the war more quickly. Obviously something went wrong and the entire world’s power went off. Now, Randall just wants to rebuild the Earth in his image or something so he allied with Monroe to get that done. Of course, we still don’t know what happened but as Rachel finally will give a bit of the details (maybe) next week, this hopefully will be revealed. I say maybe because time and again we have been promised the full details as to why and have never actually learned the truth. Maybe because NBC knows once this nugget is out, there’s nothing really worth watching here.

Hopefully that changes and “Ghost” was a bit better than some of the episodes prior to the winter break for this show. So maybe that’s a step in the right direction.