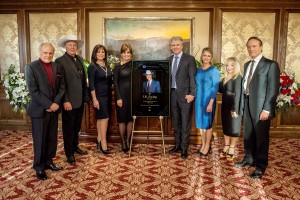 Whoa … it was almost impossible to get through the episode of J.R.’s funeral without having a tear shed, especially knowing we are seeing a cast in mourning for the real man, Larry Hagman. Tonight’s DALLAS was spot on dramatic, revelatory and fitting for the man who put Texas on the map over 30 years ago.

The opening gave us Sue Ellen (Linda Gray), Bobby (Patrick Duffy), John Ross (Josh Henderson) and Christopher (Jesse Metcalfe) in route to Mexico where J. R. was killed. They land and discover he was shot in some seedy hotel by thugs in a robbery gone wrong, at least that is what they have been told.

A soft melancholic version of the theme song begins with subtle pictures of South Fork, forestry, soft sunset skies and J.R. at the end shrouded in a bright light. We all know the truth, he is gone forever.

Drama thumps back to the screen when Harris Ryland (Mitch Pileggi, who couldn’t be more creepy) comes to the ranch demanding his daughter Emma (Emma Bell) come back home immediately. Not a chance. she stays put.

The memorial brings back many original characters including Lucy (Charlene Tilton), Ray Krabbs (Steve Kanaly), Gary (Ted Shakleford), ex mistresses and Texas tycoons including the real Mark Cuban. But, not all the guests are saddened by the news. When Cliff Barnes (Ken Kercheval) makes an appearance he is ushered out, but his feisty and vicious words spike another to toss out some unkind remarks about J.R. and quickly, ala DALLAS, a brawl breaks out at the memorial. Ah, J.R. would be flattered.

The tension is too much for Emma and John Ross who sneak around the corner to pop some pills. The darkness awaits John Ross and it is evident that he will be quickly spiraling out of control. Emma, too, with the pressure from her controlling father, is on the verge. Together, they commiserate their pain in the back seat of a car.

Bobby holds back throughout, now the true patriarch of South Fork he keeps it together until pressured by Annie (Brenda Strong). He then explodes on her, not just from the built up emotion of losing his brother but from everything she has put him through in the last few months. He has reached his capacity. He isn’t the only one unleashing though. The whole clan is dealing with the loss in their own way. Sue Ellen hits the bottle and sleeps in J.R.’s bed, admitting to her lapse the next day at the funeral and also coming clean about her still loving the man who caused her so much pain and aggravation. After she reads a letter J.R. had written to her proclaiming his love for her and asking for a second chance, more like a fourth or fifth, she presses her hand on his coffin and grants him that chance with a heartfelt speech, calling him the love of her life.

Heart wrenching to watch, it must have been even harder for the actors to participate in this mock funeral. Their pain is evident and the tears are real. John Ross is the last to leave as J.R.’s henchman comes driving up with some goodies J.R. left for him to delve out. Christopher gets paperwork, apparently J.R. went looking for his mom Pam. John Ross gets a gun to seek vengeance and Bobby is handed some documents that cause he and J.R.’s right hand man to step outside and discuss it further without an audience. Apparently, J.R.’s masterpiece was just that. He still is working it out from his grave with the help of his family. Where this leads…is anyone’s guess. So many doors have been swung wide open, although the true sadness is the passing of Hagman, the writers had been handed a gift of material to explore and the whole show is going down a path that Mr. Hagman’s omission set in motion.

As we end the episode it is with Bobby, who pours a drink, sits on J.R.’s bed and quietly mourns his brother. And it is apparent that Duffy, too, sat on that bed and wept for his friend.