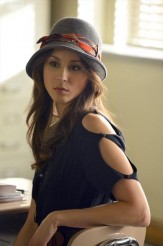 The actress talks fans, plus her new short film EXILES 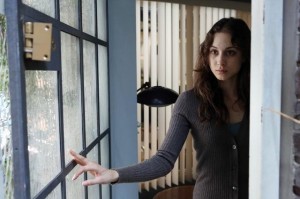 PRETTY LITTLE LIARS is now reaching the climax of its third season, Tuesday nights at 8 PM on ABC Family. The series started with a murder and has continued to pile on suspense and plot twists for three years.

Troian Bellisario, who plays driven “Liar” Spencer Hastings, has just finished doing a panel for the press about PRETTY LITTLE LIARS, where she replied to a question about what’s been the biggest surprise for her so far in playing her character Spencer: “Especially this season, there have been a lot, and I think that’s what so great about the show is that there are so many mysteries and so many unknowns in Rosewood … Is Toby a part of the ‘A’ Team? Is that because he’s good or because he’s bad? This whole season really has been about a lot of shocking moments for all of the actors, even for our own characters, like, ‘Whoa, I’m going to do that? Oh, okay. I’d better start laying that egg, because I was not expecting that either.”

Bellisario takes a little time after the panel to answer a few more questions one on one. She has recently completed work on her short film EXILES, which she stars in, wrote and produced.

ASSIGNMENT X: When is EXILES coming out?

TROIAN BELLISARIO: My short right now, we’re looking to see which festivals it will get in, so as soon as it finds a home and has a festival life, I think we’re going to figure out how we can get it out to the fans, because I know the fans are very interested in seeing it.

AX: What’s it about?

BELLISARIO: It’s about an alternate ending to the greatest love story of all time – what would happen if Romeo and Juliet’s plan had actually worked.

AX: Have your experiences on PRETTY LITTLE LIARS informed your filmmaking?

BELLISARIO: Definitely. It was a whole new side and new appreciation I got to have for filmmaking. I talked to Lisa Cochran, our line producer [on LIARS]. When I was trying to organize my little set in the middle of the desert, and I went back to work with her, and I just said, “So how do you make the circus happen, every day, on time? I don’t even know how to make the circus happen once and I had to make it happen for three days.” The fact that these shows are up and running and created and on time and well-done is just a fantastic endeavor, and I have so much respect for the people that do it.

AX: Is there anything else you’d like to say about PRETTY LITTLE LIARS right now?

BELLISARIO: Just how incredibly grateful we are for our fans. I keep on waiting for the moment when people will lose interest, like our next premiere won’t be as big, won’t be fifty-two percent of Twitter. And of course, that’s going to happen, but it hasn’t happened yet and it’s because we have such amazingly supportive and ravenous fans. And I just couldn’t be more grateful for them and for all of their support – in my other projects, as well.