Executive producers I. Marlene King and Oliver Goldstick talk about the show's longevity 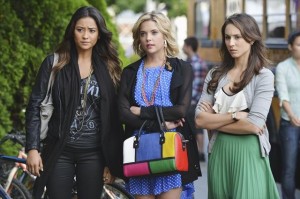 PRETTY LITTLE LIARS, the ABC Family series based on Sara Shepard’s books about a quartet of upper-caste girls in the leafy town of Rosewood whose lives are turned upside-down when they find themselves stalked by the malevolent “A,” ends its third season Tuesday, March 19, at 8 PM. Never fear – production began in January on Season Four. I. Marlene King, who adapted the PRETTY LITTLE LIARS books for television, and her fellow executive producer Oliver Goldstick of course won’t reveal any upcoming spoilers, but here’s what they’ll say for now.

ASSIGNMENT X: Have you completely diverged from the PRETTY LITTLE LIARS books at this point in the series?

I. MARLENE KING: Not completely, never completely – we always return to the books. In fact, I’m re-reading several books on this hiatus, just for fresh new ideas from Sara.

AX: How long many seasons do you think the series can run?

KING: I think Sara set the template for the books, really. I mean, she’s now on her twelfth or thirteenth book. So it just shows that we can keep going and keep having fun and reinventing mysteries and stories.

OLIVER GOLDSTICK: We also don’t play it as real time, and time moves very slow in this town. So their senior year lasts a long time.

AX: One of your regular directors is Norman Buckley. How is he to work with?

KING: He’s awesome. We love him.

OLIVER GOLDSTICK: Very talented and really gets the show, loves the tone of the show and really dives in with, I would say, an enthusiasm that is – he’s a high school kid himself, deep down.

KING: He’s a huge Hitchcock buff, so he loves all of our fond little homages.

AX: Given the amount of mischief and outright havoc going on, do you as writers have to come up with new back stories to justify how these high school kids could piss that many people off that badly?

GOLDSTICK: Only one has to piss off that many. Alison is the person you should be thinking about all the time, because she’s the one who had the most encounters with the cause [of all the malicious activity], or at least lit this many fires.

KING: We always try to make sure there’s a clear motivation for any character who’s doing something, whether it’s good or bad.

AX: Do you have a Season 4 pickup yet?

AX: What would you most like to say about PRETTY LITTLE LIARS right now?

GOLDSTICK: It’s a great season and the show gets deeper. We were very fortunate, because most shows don’t get to go on this long. So we were able to explore things we wouldn’t normally get to explore with the high school setting.

KING: It feels like we’re growing up with our fans and that’s really exciting for us.