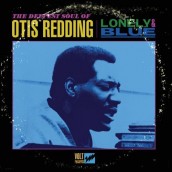 For those that only know Otis Redding for his classic R&B hit “(Sittin’ On) The Dock Of The Bay” don’t really know what they’re missing. There are so many classic Redding songs that should have been much bigger than they were and there have been so many compilations, it’s impossible to figure out where to start if you’re a newbie to the charms of this 1960s legend.

That’s why the release of LONELY & BLUE: THE DEEPEST SOUL OF OTIS REDDING is such a cool little curiosity item. Instead of simply putting out a new collection of his most popular ballads (“Try A Little Tenderness” is nowhere to be found here, which is a refreshingly bold choice), Stax Records decided to go one step further and fashion an album (packaging and all) that emulates what this album would have been like if it were released in the 1960s. This includes liner notes appropriate to the time and cover art that looks quintessentially 1960s.

Song-wise, this twelve cut disc (also available as a Vinyl release) collects some obvious tracks, but pushes itself to dig a little further into deeper songs as well as conjuring out some previously unreleased alternate tracks.

In that way, LONELY & BLUE does sound fresh and refreshing with Redding’s rough and golden pipes screaming out of your speakers with the kind of soulful angst that is rarely heard on the radio anymore.

Of the more familiar songs, there’s the perfect “These Arms Of Mine”, “My Lover’s Prayer” and “I’ve Been Loving You Too Long (To Stop Now)”, while an earlier, alternate version of “I’ve Got Dreams to Remember” (presented here in the “Rougher Version”) showcases some alternate lyrics. There’s also a more stripped down version of “Open The Door” presented in the “Skeleton Key Version.”

From Redding’s songwriting which examines the heartache and pain of falling in and out of love to the Stax label’s perfect house band of backing musicians (including pianist and producer Booker T. Jones and guitarist Steve Cropper).

While LONELY & BLUE: THE DEEPEST SOUL OF OTIS REDDING should not supplant any Best of disc you might be persuaded to buy of Redding, it still serves as a great starting point for some of his best and most underrated ballads. The bareness of these tracks augmenting Redding’s powerful vocals is a continued reminder that the 1960s had some of the best soul singers to ever grace the radio (an elite group that includes Sam Cooke, Solomon Burke, Aretha Franklin, Sam and Dave and many others).

Here’s hoping Stax continues to find new ways of repackaging old music. This is a great start to whole new alternate business model and a boon for record collectors and music aficionados like myself.