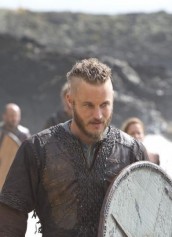 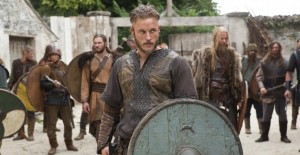 From the Earl’s wife Siggy (Jessalyn Gilsig) beating the crap out of an unworthy snitch that hoped to get a little more out of the Earl than just gratitude (he ends up getting shanked near a pile of hey by the Earl’s thugs) to Lagertha (the über hot Katheryn Winnick) taking offense to Ragnar’s (Travis Fimmel) decision to not bring her along on their trip to the West, chicks were kicking ass left and right. While pissing off Lagertha might be good to get her hot and bothered, it is definitely the wrong kind of hot and bothered as this Nord comes at you with a shield, spit, claws and whatever else she can get her hands on in order to prove she can handle herself.

In fact, you really don’t want to screw with anyone on this show. If you cross the Earl in any way, even making anchors for boats that Ragnar used to set sail across the west ocean you are ended. If you speak ill against the voyage and go flipping out of your mind, you are set down in short order. These Vikings don’t mess around with more proof of this coming further into the show.

This episode mostly centered on Ragnar recruiting a group of men to sail into the west in order to find glorious plunder in which they have never seen before. Of course, Ragnar has no idea what’s that direction except for stories about a place called “England” and that supposedly there are a lot of good stuff there. So they set sail and it is a long journey causing some to go mad (see above) but eventually they make land.

Let the quest for plunder begin!

Err, well, maybe not. The Nords’ first encounter is not exactly what they expected I’m sure as they run into a monastery and begin a wholesale slaughter of everyone there. These are not good men. But they don’t pretend to be. But they do what you would expect Vikings to do. Kill everyone and take their stuff. It’s not easy to watch but damn fun.

A few of the lucky (?) monks are left alive to be sold as slaves when they return to their homeland, including one that speaks their language and will probably be an interesting character on the show moving forward. And, yes, they were able to gather some riches (mostly gold crosses and stuff) in order to please the gods.

“Wrath of the Northmen” continues what may be my new favorite show because not only is it brutal but it shows how these outlandish traditions that the Vikings had when it comes to the Gods and life in general. Who knew to get blessed each member of the boat crew had to bath in dirty water, then take a farmer’s blow into the water only to get passed to the next dude to the same and so on down the line. Completely nasty but damn hilarious.