dancing with the stars dorothy hamill 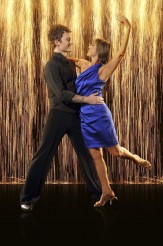 After injury, Hamill leaves resulting in no official elimination this week 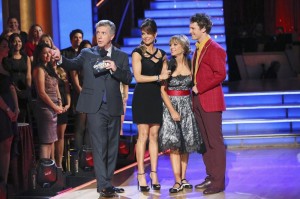 Well, DANCING WITH THE STARS never seems to be short on surprises. In a last minute notification right before one of the bottom two couples was about to be eliminated Dorothy Hamill steps up and says she must withdraw from the contest due to her injuries, doctor’s orders. So, the two bottom couples – Victor Ortiz & Lindsay Arnold and Lisa Vanderpump & Gleb Savchenko  – get a reprieve from elimination, well at least one of them did anyway.

First though, we were treated to an opener jam packed with pro dancers pumping up the place and then a quick recap before they quickly moved into the results. After all, there are twelve couple to get through, no time for all the stalling that normally goes on each results show. First safe are Ingo Rademacher & Kym Johnson, then Sean Lowe and Peta Murgatroyd. Thirdly, a stunned Wynonna Judd & Tony Dovolani.

For the first time ever the Twitter fans got to pick the encore performance which was Zendaya Coleman & Val Chmerkovskiy, who also happen to be safe, not surprising since they finished last night in first place. Next free to dance another week were Aly Raisman & Mark Ballas and a very appreciative D.L. Hughley & Cheryl Burke. But in jeopardy first was Vanderpump & Savchenko.

After a quick self promotional moment in the dance studio with Geri Ryan star of BODY OF PROOF, we saw a tidbit of the stars talking about what a huge commitment the show is for them. Nothing new, we hear the celebs dish about the difficulty of the show each and every season. Anyway, a very modish pop punk band named Icona Pop performed a techno number before we were introduced to the four new dancers on the show. A recap preceded the 6th safe team Coleman & Chmerkovskiy, 7th safe couple Kellie Pickler & Derek Hough and 8th safe duo Jacoby Jones & Karina Smirnoff.

The man with arguably the greatest singing voice ever Josh Grobin sang us a tune as we saw Chelsie Hightower & Dmitry Chaplin dance around the floor. Why aren’t THEY on the show?  Hmmm…dance politics, I guess. Soon, we discovered that Hamill & MacManus were in fact safe and that Andy Dick & Sharna Burgess were in jeopardy along with Ortiz & Arnold and Vanderpump & Savchenko. Alas, after the commercial break we found out that Dick & Burgess were in deed safe but that Hamill & MacManus were exiting the show…so Ortiz & Vanderpump were given a big huge gift from Hamill and both will return, probably hoping and praying not to be in the bottom two next week. Stay tuned!