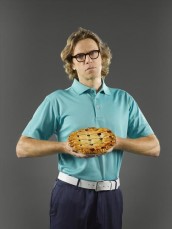 The actor talks about playing the alien next door 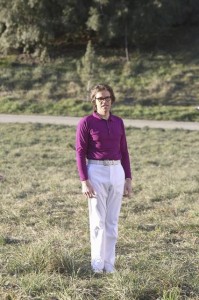 THE NEIGHBORS, ABC’s freshman series about a middle-class human family who find they’ve moved into a neighborhood full of alien refugees, has its first-season finale tonight, Wed. March 26, at 8:30 PM. The episode will bring together original STAR TREK’s George Takei and original STAR WARS’ Mark Hamill.

English actor Simon Templeman, who stars in THE NEIGHBORS as alien patriarch Larry Bird (the aliens have all adopted the names of Earth sports stars to go with their faux-human identities) talks about his experiences in portraying a Zabrvronian.

ASSIGNMENT X: How did you feel when you found out THE NEIGHBORS got a back nine episode order for a complete first season?

SIMON TEMPLEMAN: Oh, thrilled. Really thrilled. I was actually driving over one of the canyons, and I saw the call from 818, and I ignored it, and then I listened to the message and it was Chris Koch [one of THE NEIGHBORS’ exec producers], saying we’d got the back nine. And I was really pleased, because we’ve all become very close and everyone has been working extremely hard on it, and I’m very proud of the show, so I’m very happy that ABC decided to order another nine. And the scripts have gotten better and better, funnier and smarter, so, yeah, I hope people are pleased with them.

AX: Have you made any changes to what you’re doing as Larry as the show has rolled out?

TEMPLEMAN: I think for me the interesting thing is, I sometimes forget that I’m playing an alien, and I’m not sure if I should remind myself, or just forget and just play it as a human. If Larry has any dilemma, the dilemma that he has is, he’s having to change. So yeah, we’re now much more interested in the relationships between these characters and exploring the fun that there is there, and so you do forget you’re an alien. If anything, I think that would be the change that I think I’ve experienced.

AX: Is Larry liable to get stuck in his natural form for any amount of time, causing you to have to wear makeup or a costume?

TEMPLEMAN: I don’t know, but they always manage to get me in some ridiculous costume and humiliate me, which I’m thrilled about.

AX: And how are you enjoying playing opposite Toks Olagundoye, who plays Larry’s wife, Jackie Joyner-Kersee?

TEMPLEMAN: Toks – she’s a phenom, really. She seems to be able to do anything – an astonishing array of accents, she can sing, I’m sure she can dance, she can probably play guitar, too. But we have an episode where the Bird-Kersees go to Broadway, and we decide that we want to write our own Broadway show. So we’re very lucky to have the great Alan Menken write a couple of songs for us. I heard them the first time, and I was like a schoolgirl – I was giddy with excitement. So we get a chance to sing. Toks sings, I sing as Larry Bird, and Tim Jo [as Reggie Jackson] sings– Tim’s got a wonderful voice and is a very talented musician. [Menken has] written one particular song and it’s very Broadway and it’s really, really fun.

TEMPLEMAN: He’s a treat. He’s wonderful. He’s the kind of go-to comedy guy. If you want to finish the scene on a laugh, just give the line to Doug. He’s fantastic.

AX: There are a lot of children in the regular cast of THE NEIGHBORS, as your character is a dad and the Weavers next door have three offspring. How is it working with them?

TEMPLEMAN: You know, they always say never work with children and animals, and I could understand that, but as an actor, it’s really good, because not as much acting is required. If you’ve got a real kid, somebody really young, it makes you behave in a certain way. It’s also nice having kids on the set. And we’re very lucky that the kids that we do have are really nice kids. They’re smart kids and their parents do a great job of making sure that they behave in a professional manner, which is great.

AX: To ask about some specific episodes, there’s one where Larry leads a Girl Scout troop …

TEMPLEMAN: Yeah. It’s very funny. Larry is placed in charge as a sort of babysitter, and anything vaguely militaristic like the Girl Scouts, Larry will be all over. And it’s an introduction to the world of girls for Larry Bird, which is always a good thing.

AX: In what we’ve seen so far, do you have a favorite episode or a favorite scene?

TEMPLEMAN: I did a scene with Isabella Cramp, who plays Abby [the youngest of the Weaver children]. I loved playing that and I like the way the writers have placed different characters with new characters, so that any scenes I get with the kids I always enjoy, because I haven’t explored those relationships so much, so I’ve loved those.

AX: Have you made any suggestions to the show runners that they’ve taken on for Larry?

TEMPLEMAN: There’s a really nice atmosphere on the set and a lot of it has come from Chris Koch, one of the directors and producers of the show, and Dan [Fogelman, the series’ creator and exec producer] is always coming up with alternate lines and stuff, so they will encourage us to improvise and ad-lib, provided it doesn’t get out of control, because if everybody’s trying to save the show, there’s no show. So we work to a fairly tight discipline. They will allow us some takes to throw in our own ideas, and sometimes they’ll use them if they seem to work, so it’s nice that there’s that sort of give and take, but I would say maybe ninety-eight percent of the show is the script, because the scripts are good. And there’s no point in saving a show that doesn’t need saving. And they always give us really fun things to say. But yeah, they’ll allow us that kind of freedom, too, which is great.

TEMPLEMAN: No. This has been time-consuming, in a really good way, that there really hasn’t been time to do anything else. And the time that I’m not working on THE NEIGHBORS, I’m trying to spend with my family, because it’s nice to be home with them. I did a sort of video game, a motion capture thing, that will be coming out fairly shortly, but I don’t think they’re announcing it yet.