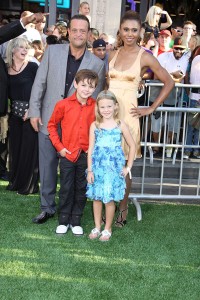 In ABC’s freshman comedy series THE NEIGHBORS, Wednesdays at 8:30 PM, the Weaver family, headed up by mom Debbie (Jami Gertz) and dad Marty (Lenny Venito), move to an idyllic-looking suburban development – that turns out to be entirely populated by aliens stuck on this planet after they’ve lost their ability to return to home planet Zabvron. The aliens take their names from human sports celebrities, so the Weavers’ next-door neighbors – and tentative new friends – are dubbed Larry Bird (Simon Templeman) and Jackie Joyner-Kersee (Toks Olagundouye). The results are multiculturalism at a wider range than mere terrestrial folks ever imagined.

Series creator/executive producer Dan Fogelman, who also wrote and/or collaborated on the screenplays for CARS, TANGLED, BOLT and CRAZY STUPID LOVE, takes some time to talk about his extraterrestrial TV comedy.

AX: Were you surprised or gratified that THE NEIGHBORS has done so well?

DAN FOGELMAN: I’m not surprised.  I’m gratified – I want more, I want more people and more people and more people to see it. I’m really proud of the show. I was more surprised by some of the critical backlash at the beginning towards the show. I’m normally pretty attuned to how people are going to respond to things, and I think the idea of aliens really kind of scared some people off at the beginning of a sitcom. They couldn’t quite get their heads around it for some reason. But I’m really pleased with it. I think it’s a really good show. I’m excited that people are finding it.

AX: But MY FAVORITE MARTIAN was a half-hour sitcom, and that was well-liked …

FOGELMAN: As were many others. I always said, there have only been a handful of alien comedies on television over the years, four or five – MORK AND MINDY, ALF, MY FAVORITE MARTIAN, THIRD ROCK – whereas in movies, you have sixteen alien invasion movies a year. If it was yet another family sitcom, or a series about five friends living in a thing, I understand that there are a lot of those, but there aren’t that many alien shows. So that [initial reaction] caught me by surprise a little bit. It’s not like a lot of shows have had the same kind of scope, so I never understood why that was such a big part of it. But anyway, I’m thrilled with the show. I love it. We’ve hired really great writers, I’m thrilled with our actors, I know where the series is going, I think we’re doing something with a really high degree of difficulty that I’m really proud of and I think it’s turning out well.

AX: Are the story arcs going faster or slower or about at the pace that you’d envisioned when you started?

FOGELMAN: Pretty much at the pace. We had a plan for the season and for the series. We always had a plan for a little bit of a romantic arc with our teenagers. It’s about what happens when the strange alien boy next door starts developing feelings for the teenage human girl living next door from him, and so we have a little arc there that plays out really sweetly and romantically and gently in the course of the second half of the season.

AX: Will their parents be freaked out or happy about this?

FOGELMAN: They’re unaware until the end of the first season. [Assuming there is a] Season 2, we’re going to pick up what happens in that regard, if they would actually express their feelings to their parents or start dating? The general arc – for the aliens, it’s about the resistance [to human norms]. It’s kind of like Larry Bird’s character is a bit of an alien Archie Bunker. He doesn’t ever want to do anything that’s very human or commit to anything human. His season arc in the first season is kind of accepting that this is his home now and starting to fall for Earth a little bit.

AX: We’ve had at least one failed neighborhood takeover by a rival alien faction. Is that going to resurface as an issue?

FOGELMAN: End of the first season, we have [George Takei] lead an alien faction from the other planet in the final episode. He could even possibly be Larry Bird’s father.

FOGELMAN: Big Bird, that’s what we call him. You literally took a line from the script – they refer to him as such.

AX: Doug Jones – the Silver Surfer from FANTASTIC FOUR, Pan in PAN’S LABYRINTH, Abe Sapien in the HELLBOY movies – has been recurring as Dominique Wilkins. Is he coming back?

FOGELMAN: He’s in our musical [airing tonight, March 13]. We’re doing an episode with songs [by Alan Menken] and he’s actually singing. He’s in almost all the last episodes of the season. He’s very, very, very funny, and he’s naturally – we’re pretty loose for the ends of scenes, we always try out a bunch of jokes to get out of scenes, and whenever we have Doug on set, we tend to give him one and he tends to nail it.

AX: You have a lot of young actors playing the kid characters. What will the time frame be between Season 1 and Season 2?

FOGELMAN: It’ll be like a summer vacation. They’ll get older – they’re growing like crazy and it’ll be like you were off while the show was off the air. The kids grew up that much more. We’ll keep it in real time.

AX: So you’re not going to have that TV problem where suddenly the kids are enormous, but it’s supposed to be the following week?

FOGELMAN: Not at all. I’ve always imagined that if, fingers crossed, we come back for Season 2, they opening of the series for Season 2 would be kids doing book reports on what they did over their summer vacations to catch the audience up to what happened in the town during the break.

AX: At the start, there were some jokes based around perceptions of gender roles …

FOGELMAN: Yeah, we’re still doing it. We’re shooting an episode right now where Jackie Joyner-Kersee where she decides she’s going to go to work and Larry Bird has some problems with that, because he’s kind of still stuck in that 1950s mentality and he winds up in leading a Girl Scout troop with a little human girl, taking over the Girl Scout troop, falling in love with girls and women and beginning to understand they value they can have for the first time. It’s a really, really funny episode.

AX: Do you have a favorite episode from the first half of the season?

FOGELMAN: Halloween always holds a special place in my heart. We did an episode about romantic relations that I really loved, called “Fifty Shades of Green,” which was about how the alien couple and the human couple kind of romantically connect with one another and learn from each other.

AX:And now you’re about to do a feature film …

FOGELMAN: I’m doing a movie, IMAGINE, starting in April with Al Pacino and Jeremy Renner and Julianne Moore that I wrote. I’m going to direct it. So I’m going to go from this [THE NEIGHBORS] to that.