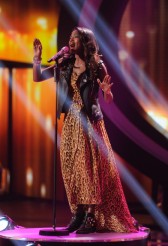 The ladies outshine the men by leaps and bounds 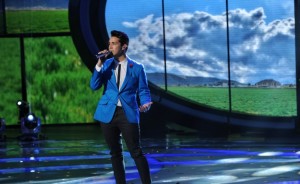 It was traffic that may have grabbed the headlines on the opening night of the world’s greatest karaoke competition, AMERICAN IDOL, thanks to the tardiness of judge Nicki Minaj, but the real question is will the boys be able to keep up with what seems to be a very strong contingent of women singers this season.

The opening competition of the Top 10 focused on songs that previous IDOL winners have done – whether it be their own work or songs they sang on the show.

Not sure if “I Believe” by Fantasia was the best song for a guy who has some serious pipes but perhaps even a bigger mistake was that jacket. Holy cow, who is dressing these people this season? Seems every week we are seeing terrible outfits. In any event, it wasn’t bad. It was definitely not the outstanding performances we have seen from him in the past two weeks, however. Luckily, I think he’s probably safe this week. Urban loved the jacket. Jackson loved the jacket but wants him to try something different outside of the inspirational songs. Carey, on the other hand, liked the choir aspect to his performance and wants to hear more of the gospel from him. Grade: B-

Honestly, I didn’t expect Janelle to be in the Top 10. I figured Breanna or some other soul singer would get into the finals but I guess there are already a handful of soul singers so it was a bit of a shock to see two country singers and two soulful singers get in. As previous seasons of IDOL have proven, country singers last a long time on the show and her version of “Gone” by Montgomery Gentry while pretty good, won’t be the best thing we see on the show but I don’t see her going anywhere. Urban thought it was great. Minaj, who finally joined everyone and looks like Minnie Mouse after a hangover, wants her to sing more pretty songs to highlight her voice. Jackson didn’t like the song choice or how it was performed. Carey thinks she’s a star but wants a more mid-tempo or ballad from her in the future. Grade: B-

Devin talks about how he wants to move away from the ballads and sings “Temporary Home” by Carrie Underwood, which is pretty much a ballad. So not sure what he meant there. It did get away from the Spanish singing which is fine because I can see him wanting to appeal to other viewers but not sure choosing another ballad is the way to go as Jimmy Iovine told him. Overall, it lacked some serious passion and ended up halfway putting me to sleep. It wasn’t badly sung but just boring. Urban thinks it wasn’t one of his better performances and was the wrong choice. Minaj disagrees and sounded great. Jackson thought it was way too safe and he needed to step it up. Carey didn’t choose a side and instead gives both sides of what the others said. Grade: C+

I get what Iovine was saying about Angie being sort of pageantry as she comes off as trying to be hot while singing. Well, I’m not complaining because she is hot. So whatever. Angie’s performance of Celine Dion’s “I Surrender” was by far the best performance of the night. From the accompaniment to showing off how well she can sing, hands down beat the other three and shows off what Jackson was saying earlier about the contestant’s bringing it. Urban said she knocked it out of the park tonight. Minaj said she looked like a billion dollars and called her perfection on every level. Jackson said she was in it to win it. Carey called her stellar. Grade: A-

Paul was the other surprise of the picks last week. I didn’t think that he did enough to make it here but maybe there are enough tweens out there voting for him that pushed him along. Singing “Amazed” by Lonestar, Jolly took a country song and turned it into a terribly boring ballad. Sure, it isn’t a good thing following Angie on stage but to go from a stellar (Carey) performance to this just showed how the chicks this year are just so much better than the boys. Urban thought it was one of his best performances. Minaj said it was one of his better performances and stimulated her sexual impulses. Jackson loved the song choice. Carey doesn’t think he performs like in a theater but she doesn’t want him pulling his punches on the songs either. Grade: C

Yet another ballad. Luckily, Candice is a powerhouse and really came through here not just with the vocals but whoever helped her with the accompaniment of the violins and drums. It really gave the performance that one extra thing that it needed. “I (Who Have Nothing)” by Ben E. King has been sung on IDOL many times but this is probably one of the better performances we have seen. I wasn’t sure that Candice was going to be one of the frontrunners initially but this put those thoughts to doubt. Urban loved it. Minaj said no one should ever perform the song again, it was that good she said. Jackson said she worked that song out and called it one of the greatest songs of the season. Carey pretty much said nothing of interest. Grade: B+

Not sure what’s up with Lararo. Does he have some sort of speech impediment? Is he high? Half the time he’s either stumbling his words or I just can’t understand him. But when he sings, all of that seems to go out the window. Not sure why he picked that suit because it certainly isn’t 50s week. Singing “Breakaway” by Kelly Clarkson it continues the night where mixed gender songs are the name of the game. His performance wasn’t that great. The song didn’t really do him many favors and neither did following Candice. Once again the girls are kicking the ass of the men. Urban didn’t like the song. Minaj actually liked his look but didn’t like the song at all. Jackson called it pitchy and thought the song was way too big for him. Carey wasn’t mad at the song choice but thought he could have had a better one, which is saying she didn’t like the song choice. Grade: C-

And yet another ballad. At least this one is old school with Kree seeing “Crying” by Roy Orbison. Being the second of two country singers it could be that fans of the music genre could be forced to choose just one of the two and the other goes out rather early. It seems that Kree might have a leg up on Janelle just in terms of the power of her vocals and that means she might be around for a while. Urban loved the performance. Minaj said something about waffles and the song being smooth. Jackson said she has one of those infectious voices and thought it was a subtle performance. Carey just says what the other judges already said. Grade: B

At this point in the competition, I’m ready for my pillow and blanket. Burnell sent me over the top with his performance of “Flying Without Wings” by Westlife. Even after being warned by Jimmy Iovine about doing ballad after ballad, Burnell still came out and bored the crap out of everyone. Sure, the vocal was fine and some of the others on the night have done worse, but he’s gotta do better than this to stick around. Urban loved it. Minaj thought he did a good job. Jackson also thought he did a good job. Carey loved the choices he made during the song. Grade: C

Amber proved what has been a theme all night – the women just outshine the men. Every singer on the female side has been at the least serviceable with many of them being very good. Outside of Curtis, the men haven’t done very well at all. Amber sang “A Moment Like This” by Kelly Clarkson and belted it out showing she is also one of the frontrunners in the competition. It sure is looking like a woman will win this year. Urban thought it was really beautiful. Minaj called it the best performance of the night. Jackson thinks she has arrived and the performance was beautiful. Carey got goosebumps and loved it.

So who will be in danger and in the bottom three? I think it will be Paul Jolly, Lazaro Arbos and Devin Velez in the bottom with Lararo going home. What do you think?