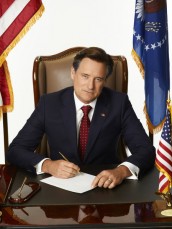 The actor chats about his new NBC comedy series 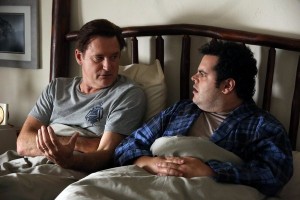 Bill Pullman is currently starring as U.S. President Dale Gilcrist in NBC’s new half-hour comedy 1600 PENN, Thursdays at 9:30 PM. In addition to matters of state, Pullman’s chief executive has to contend with how three of his children (Martha MacIsaac, Amara Miller, Benjamin Stockham) react to their relatively new stepmother (Jenna Elfman) and the well-meaning but often embarrassing exploits of his oldest son Skip, played by Josh Gad, who created 1600 PENN with Jon Lovett and Jason Winer.

Pullman has just finished a raucously funny Q&A session at the Television Critics Association press tour for 1600 PENN with his fellow actors and the writers/exec producers. The actor has a long and storied career, but for the purposes of this interview, two of his previous roles are particularly relevant. Pullman played the President before in the 1996 alien invasion feature INDEPENDENCE DAY and, more recently, portrayed homicidal child abuser Oswald Danes in the 2011 science-fiction miniseries TORCHWOOD: MIRACLE DAY.

ASSIGNMENT X: How do you feel about playing the U.S. President again?

BILL PULLMAN: I did have a question, like, “God, on my tombstone, are they going to say ‘President’ now?” I would prefer “Pedophile” for a tombstone, just because it’ll always be remembered. Presidents get forgotten. When we were first shooting, it was tough, frankly. I’m used to having more control over things, but it’s the [television] machine of trying to write jokes and keep that whole thing going and I eventually eased up myself and felt like it’s fun to be around people who know how to make a joke happen and you can see [from the just-concluded panel] – they’re competitive all the time with who’s going to [come up with] the funny wisecrack that makes it win, but I’m really learning a lot from them.

PULLMAN: Well, they set me up in this thing [that] I have drones in the sky, I’m easy to get hostile or gruff or something like that. But the great thing, I’m thinking, about this television experience for me is there’s a lot of things that get subtle in there. They think the jokes are what it’s all about, but there’s this other undercurrent. Jenna [Elfman as the First Lady] and I have this [relationship] – she’s younger than I am and it actually becomes part of the story, but as much as I’m the President of the United States and I’m overly forthright from time to time, I also am very protective of trying to make sure our relationship is going well, even though there’s a lot of challenges in it and everything, so I think that subtext starts to come through. [As Gilchrist], I have my own gaffes that I try to cover up and [the other characters] try to help me with.

AX: So you’re not always the straight man for other characters …

PULLMAN: No, I get some good stuff, too. Bruce Campbell plays my brother in an episode and that’s all about sibling rivalry and him never giving me due respect for being the President of theUnited States. When I heard about the idea, I thought, “Oh, this means Bruce is going to come on and score a lot of jokes off of me,” but it’s not that way at all. And it’s very physical.

AX: Is everybody involved in 1600 PENN always like this? Much of this panel felt like watching good stand-up comedy.

PULLMAN: Stand-up, yeah. These guys are good. They’re like that on the set, every day. And it’s a good thing about Josh [Gad] that I’ll never say to his face is that he’s a fantastic human being. You would think he’s set up to be an egotist extraordinaire – he thought up the idea, made it, he’s the exec producer, he’s gets the most lines, he gets the most improv time – but inside of that, he’s very protective of everybody in the cast.

AX: As the series continues on from the pilot, it seems like all of the characters are explored further.

PULLMAN: Yeah, I have a great episode with Ben [Stockham as the youngest Gilchrist child] where we are rivals at the Risk game, and Jenna has a lot of things with Martha [MacIsaac]. Martha is the secret weapon. She was the quietest one today – I think she’s so extraordinary on the show. I find her part the hardest part, because she’s got to be the goody two-shoes, she’s an overachiever, and she does it with so much humanity that I’m really impressed by her.

AX: What would you most like people to know about 1600 PENN?

PULLMAN: Television has gotten so diversified. There’s so much out there. It’s an incredible world. But I think this solid base of a family [show with across the board appeal] – what I’m really glad [about] is that [Pullman’s real-life family has] a ranch in Montana. We’re friends with a lot of people that are very conservative, and I’m so glad I’m finally doing something they can watch [laughs].