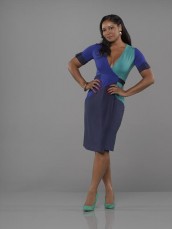 The actress talks character romances on the series 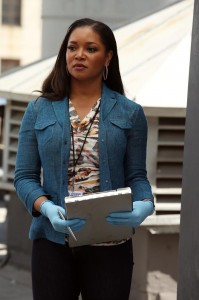 On ABC’s CASTLE, currently in its fifth season on ABC, Mondays at 10 PM, mystery writer Richard Castle (Nathan Fillion) and NYPD homicide detective Kate Beckett (Stana Katic) are now officially a couple. Their friend, medical examiner Lanie Parish, played by Tamala Jones, isn’t as stable in her love life. She has an on-again, off-again relationship with Detective Javier Esposito (Jon Huertas), but we can’t tell if that’s going anywhere or not.

Jones, a California native whose first name rhymes with “Pamela,” took some time to talk about her favorite episodes, Lanie’s romantic prospects and her preparations for wearing that shapely red dress in this year’s Valentine’s Day episode

ASSIGNMENT X: At least in the current arc, Lanie is commenting a lot on Beckett and Castle’s love lives. Is that fun, or does it make you think, “I’d like Lanie to get some romance now”?

TAMALA JONES: It’s fun, because everybody’s wondering what Lanie knows about how in deep they are, but I think there is a chance, because Andrew [Marlowe, series creator and show runner] said to me, “Make sure you can wear a tight red dress soon.” So to me, [in the] Valentine’s Day episode, something [was] happening [between Lanie and Esposito]. I don’t know exactly what. But I’m very happy finally that Castle and Beckett have gotten together. I think everybody has wanted that. And they’re playing it pretty well.

AX: Are you enjoying Lanie being romantically unentangled?

JONES: I’m a little romantic myself, so personally speaking, I want her to get back with Esposito. He’s so strong and sexy and steamy. So I’m hoping to see them back.

JONES: I got told that about a month [before the episode was shot], “Make sure you’re ready” [laughs].  I worked out, doing my little stretches and my squats.

JONES: “Swan Song.” I love that episode. “Swan Song” is freaking amazing. I thought that was one of our best this season. And of course, last season, “The Blue Butterfly” [with all of the regulars playing people involved in a 1940s crime] was my favorite. I got to sing.

AX: Might you get to do any more singing?

JONES: I don’t know. I keep hearing there might be a karaoke episode where we’re out and then we’ve got to leave, and I don’t know if all of us get to sing or just one of us – who knows. Andrew is like a ninja – you don’t ever hear him coming, but he’s quite a blast.

JONES: I have a project that’s in the Pan-African Film Festival. It’s called THINGS NEVER SAID. It’s starring myself, Shanola Hampton from the show SHAMELESS, and Omari Hardwick, who is very sexy and a very good actor. It’s really good – it kind of reminds you of LOVE JONES, with a little bit more of a dramatic twist.