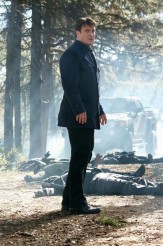 So we knew Alexis was the actual target, but not why. And only one loose end left dangling. 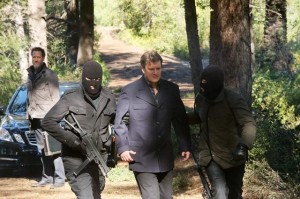 Did we or did we not call in last week’s episode of CASTLE, “Target?” Now, in “Hunt,” we are vindicated – Alexis (Molly Quinn) was, indeed, the target in the double kidnapping. Yes! Better yet, the circumstances were totally unexpected and there was only one loose end left dangling. Okay, it may have gotten picked up, but I didn’t hear that part.

So just as the Feds were telling Castle (Nathan Fillion) to be patient – like that was going to happen – the ransom call came in, and sure enough Sara was released, but not Alexis. Well, we knew Castle was going to take off for Paris. What surprised me was that he chose to shout out Beckett (Stana Katic). I think it was about not getting her into trouble, but not a smart move. Fortunately, Beckett didn’t get angry about it, but decided to do what she could from her end.

Castle, of course, “knows” someone from his many excursions to research his novels. So he meets his contact, but the contact has the single worst French accent I’ve heard in a long time. I’m guessing actor Christopher Curry is not French. His accent while speaking English wasn’t bad, but when speaking French – even I could hear how off it was.

So Castle hooks up with Jacques Henri (Christopher Heyerdahl), who can find Alexis, but won’t guarantee bringing her back alive. Henri drags Castle down to his lair, where the Mole (Paul Rogan) has his fancy tech set up. The Mole asks “Il a entendu?” which means “Does he understand?” not “he can hear your heart,” as Henri translates. Not sure what was going on there – possibly I missed the line, but don’t think so.

Even more ridiculous was when they located the office from where Alexis Skyped Castle last week, within a six block radius and with a restaurant on the bottom. This is Paris, for cripes sakes! There are restaurants on the bottom of half the buildings in the city!

Back home, Beckett got tough with one of the dead guy’s girlfriend, not that it does any good. Nor does finding the office where Alexis was held (no, duh), because we knew they were going to be long gone by that point. Sure enough, there’s a bug in the wall – the kind used by spies. Oops. That’s important, but gotta confess, it went right past me in the moment. And at home, not only has the dead guy’s apartment been trashed, his computer drive has been erased. Ah, but your average tech wiz knows how to fix that, which given that we know have international espionage involved, you’d think the spies would know how to really clean a hard drive. It’s not that hard. But finally, hard evidence that Alexis was the actual target.

Too bad Castle turned his cell phone off and didn’t get Beckett’s call to warn him, or he might have been a little less trusting when Henri took him to a ransom drop site in a forest. So we get the very fun, but ridiculous handgun (Henri) up against assault rifles, which I was going to make fun of, except that Henri didn’t have the handgun out to shoot the guys with the rifles. And just as the bad guys are about to shoot Castle, rat-a-tat-tat, the bad guys get shot.

Over the rise comes the sexy older man, Jackson Hunt (James Brolin). Didn’t know the episode title was a pun, did we? But he has saved Castle, tells him to get the phone and the ransom money and gets him out of there. Because now, all of a sudden, the bad guys aren’t Egyptian. They’re Russian. And sure enough, Alexis is being held in a cage and bad guy Volkov (Nestor Serrano) is threatening to kill Hunt.

At Hunt’s place, you see the wall with all the pictures of Alexis, including baby pictures, and it suddenly hits that we’re in for a little Darth Vader action. Yes, Hunt is Castle’s long-lost daddy. Turned out, he couldn’t stick around even though he’d wanted to after meeting Castle’s mom Martha (Susan Sullivan). But Hunt has been watching Castle and then Alexis over the years. In fact, Hunt gave Castle Ian Flemming’s first book Casino Royale. That, by the way, is the very first James Bond novel. I have so got to read that book.

So Hunt, who knows where Volkov is, challenges Castle to exchange playing cop for playing spy (nice bit of dialogue there), and send Castle off to disable the building’s power. And Castle gets caught and dragged into the room where Alexis’ cage is, while Volkov is calling Hunt and telling him he’d better give himself up or he’ll kill Alexis and Castle and just when he’s about to pull the trigger, something goes off.

It all goes down pretty quickly. Suffice it to say that obviously Castle knew what was about to happen, thanks to all those interspliced scenes showing Hunt and Castle preparing for the attack and Hunt telling Castle he’s always been proud of him, sniff, sniff.

So we have the big homecoming, and sure enough there’s a copy of Casino Royale waiting for Castle. And I’m not sure he was supposed to, but Castle starts to tell Martha about Hunt as we fade to black.

All-in-all, a rather pleasant ending to the two-parter.