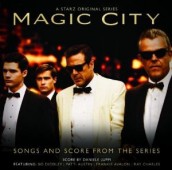 When it comes to 60s retro music, few composers have shown an ability to conjure the decade’s diverse vibes like Italy’s Danielle Luppi. He’s rocked with HELL RIDE‘s biker guitars, dropped a martini in the hep jazz of THE WOMAN CHASER and cooed with the psychedelic eroticism of his country’s Shagadelia for the concept album “An Italian Story.” So it’s no surprise to see why Luppi’s been plunked in the middle of a late 50s crime-and-sex ridden Miami hotel for his biggest scoring shot yet in America with the Starz series MAGIC CITY. But what is a shock given the setting is that beyond a lush, Mancini-Latin noir opening theme is that this is black MAGIC indeed, with nary the fizz of the expected lounge sound to take our attention away from the story’s morally depraved underbelly.

Just like the beleaguered manager of The Miramar Hotel, it’s Danielle Luppi’s job to handle the behind-the-scenes dealings with unsavory characters while the topside guests enjoy the musical fun stuff. But here that task marks a melancholy orchestral win for the composer, who reveals a strong, subtle dramatic talent in his broodingly suspenseful work with string and piano percussion that nicely recalls Nino Rota’s death-in-the-waiting underscoring during the Cuban revolution scenes in THE GODFATHER PART II. Another compatriot whom Luppi pays powerful homage to is Ennio Morricone, especially in the long, doom-laden strings lines that filled that composer’s Vegas gangster score for BUGSY, Luppi’s fine, melodic score resonates with the wages of sin, from dream-like bells of a deceitful lush life to the orchestra’s mesmerizing and brooding power creating a heavy-duty feeling of tragedy without wallowing in regret. His MAGIC is a class act, recalling the glitzy underbelly of a time gone without outrightly recalling its instrumentation.

Before going behind the scenes of the Miramar, disc one of MAGIC CITY takes you to the lobby and swimming pool, ironically contrasting the sweaty r & b likes of Bo Diddley’s “I’m A Man” and The Diamonds’ “The Stroll” with the more carefree pop confections of Frankie Avalon’s “Venus” and the sultry jazz of Patti Austin and Julie London swooning with “Tenderly” and “Chances Are.” Meanwhile, the Latin sounds of Tito Puente and Beny More fill the atmosphere with ethnic heat amidst the made men favorites, all contributing to the dangerous nostalgic draw of MAGIC CITY.

Clink on the link to buy the MAGIC CITY soundtrack