The actress talks all about Season 3, CHINA BEACH and, yes, gross stuff 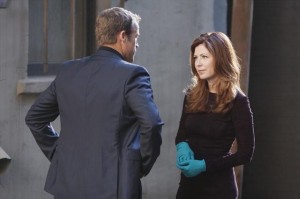 BODY OF PROOF is back for its third season on ABC, Tuesdays at 10 PM, with a few revisions. Dana Delany still stars as Dr. Megan Hunt and she’s still working in the medical examiner’s office and struggling with being the single mother of teen daughter Lacey (Mary Mouser). This season, however, Megan and her boss Kate (Jeri Ryan) are working with a new pair of police detectives, played by Mark Valley (who previously costarred with Delany on PASADENA) and Elyes Gabel, and the crime-solving procedural aspects are heightened.

Delany is no stranger to playing medical professionals. She spent four seasons as Vietnam-stationed U.S. Army Nurse Colleen McMurphy, which garnered Delany two Outstanding Actress Emmys. She also played a doctor on one season of PRESIDIO MED and even did a guest voice as Dr. Susan Fox on the animated DUCKMAN. The New York-born, Connecticut-raised Delany had her first series regular role in SWEET SURRENDER. Feature films include MASQUERADE, WIDE AWAKE and CAMP HELL. Delany also has had a long run as the voice of Lois Lane in various animated incarnations of SUPERMAN. She recently guest-starred opposite erstwhile PASADENA and DESPERATE HOUSEWIVES costar Nathan Fillion on CASTLE, playing a duplicitous government agent.

At a party thrown by ABC for the Television Critics Association, Delany takes some time to talk about the new aspects of BODY OF PROOF and her history of playing strong women.

AX: It’s been a very long time since you played nurse Colleen McMurphy on CHINA BEACH.

DELANY: It’s [just been released] as a box set. Finally. I’m very happy about that.

AX: Is there any kind of similarity between playing a medic on CHINA BEACH and on PRESIDIO MED and playing a doctor on BODY OF PROOF?

DELANY: Oh, yeah. Yeah, I mean, obviously, people are dead on my show. I think [as a medical practitioner] that you’re ultimately always an advocate for the patient. And doctors are always that, and I think ultimately, my characters end up being the person who’s there for the patient.

AX: Your characters all tend to be pretty strong people …

AX: Did you ever play any kind of, damsel in distress roles?

DELANY: Well, I think I did before CHINA BEACH, but once I played Colleen McMurphy, I couldn’t go back and it kind of ruined me for those roles [laughs].

AX: So that’s a specific choice on your part?

DELANY: Yes. Because I feel like [the damsel in distress characters are] not fair to women.

AX: Have you ever had to take a hiatus because the stronger roles haven’t been there, or do you feel like there’s been progress in having more strong roles written for women?

DELANY: I think I’ve been pretty lucky. I think if you put it out there what you want, you get those roles. Even on DESPERATE HOUSEWIVES, I played a neurotic character, but she was strong in her own way.

AX: How do you feel about BODY OF PROOF adding of a little more of the police procedural element this season?

DELANY: I think it works in terms of the plot. I think we needed that to motivate more of a drive to the show, because there is a systemic problem when the person’s already dead; there’s no urgency. So by putting this urgency in, it keeps things moving a little faster.

AX: Has there ever been anything on BODY OF PROOF that’s grossed you out?

DELANY: No. Nothing grosses me out. I don’t love snakes, but I’m fascinated by them. I had to deal with a snake and a rat live on the show.

AX: Has anything on the show ever scared you, like the pandemic plotline?

DELANY: I don’t get scared easily. I like being scared.

AX: So you’re not thinking, ‘What if this actually happened?’

AX: How is it playing a parent?

DELANY: Especially not being one, I love it, because I love her [Mary Mouser, who plays Megan’s daughter Lacey on the show], I think she’s just a genius actor and I just love her as a human being, so it’s been great.

AX: There’s a scene coming up where you seem to hit a stuntman with a door …

DELANY: Oh, no. It just looked like that. But it was fun to do. I do like doing stunts [laughs].

AX: And do you have any other projects going on right now?

DELANY: When I finish this [season of BODY OF PROOF], I’m going to go toNew York and work on a play that a friend of mine wrote, and then we’ll see what happens.