THE '80s - THE DECADE THAT MADE US
Interviews

Exclusive Interview: Vincent Paterson on Michael Jackson’s THRILLER and THE ’80S: THE DECADE THAT MADE US 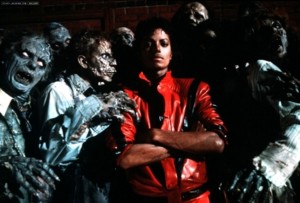 Even people who weren’t alive during the Eighties are familiar with the cultural icon that is MICHAEL JACKSON’S THRILLER, not only the song, but the music video with its oft-recreated zombie dance.

National Geographic Channel features THRILLER in its new documentary series THE ‘80S: THE DECADE THAT MADE US. One of the subjects of the documentary is Vincent Paterson, the assistant choreographer on THRILLER who has gone on to work as a director/choreographer with music stars in a variety of genres.

Paterson gave Assignment X an exclusive interview on his thoughts on the decade that made THRILLER.

ASSIGNMENT X: There were a lot of music videos made in the Eighties, but THRILLER is one of the few, if not the only one, with a recognizable dance that has endured for almost thirty years now. Do you have any idea what it is about that dance that has remained so popular?

VINCENT PATERSON: You know, I’m not exactly sure. I’ve been asked that so many times. I really think it’s the fact that it’s simple, the fact that it was original, the fact that, even if you do it badly, you can still look good. You don’t have to be a trained dancer to look like a zombie, and I’ve just been flabbergasted at the amount of things on YouTube, from wedding receptions to the prisoners over in Asia, who were able to pick up the thing and make it work. I think it has to do with a bit of the simplicity of it, and also the fact that truly, you don’t have to look like a dancer to be able to do the movement in THRILLER.

AX: When you were making THRILLER, was there any thought given to, “People will want to emulate this”?

PATERSON: No. Everything that we created at that time, and all through the Eighties, we never really imagined – we knew, after “Beat It” had happened and Michael had begun to take off, we sort of knew that this was a special experience, but we didn’t have any idea what was really going to happen. We had no idea of the repercussions of what would happen with this piece. To us, it was just a great opportunity. We had a lot of fun.

AX: Are you in the THRILLER video?

AX: Which one are you?

PATERSON: I’m not going to tell you that. I’m the one that looks like a zombie [laughs]. I’m kind of in the third row, sort of back behind Michael, there are girls framing him in the second row and I’m in the third row back. There are a couple close-ups of me in there, but the most exciting part as a dancer in that project was to sit in the makeup chair and go from being a beautiful healthy human being to really looking like what I’ll probably look like after awhile in the grave. It was pretty freaky. Rick Baker did the makeup – it was unbelievable.

Article Source: Assignment X
Article: Exclusive Interview with Vincent Paterson on Michael Jackson’s THRILLER and THE ’80s: THE DECADE THAT MADE US