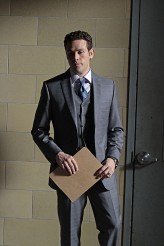 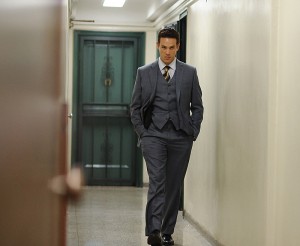 On CBS’ freshman series GOLDEN BOY, Tuesdays at 10 PM, Walter Clark (Theo James) has become the youngest police commissioner inNew York City history. Much of the series takes place in flashback, showing us Walter’s rise to the top. When Walter becomes a homicide detective, one of his heroes who quickly turns into a squad room nemesis is Kevin Alejandro’s character, Detective Christian Arroyo. Christian has plenty of ambition and doesn’t mind bending a few rules to get ahead.

Alejandro spent three seasons on TNT’s acclaimed SOUTHLAND as LAPD homicide detective Nate Moretta, who was fatally gunned down. On TRUE BLOOD, Alejandro’s character Jesus was stabbed to death, but since TRUE BLOOD is a supernatural series and Jesus’ boyfriend Lafayette (Nelsan Ellis) is a spirit medium, Alejandro continues to recur on that show.

Alejandro originally hails from West Texas. “My grandparents are from Mexico, from Guadalajara. I grew up very Mexican – I lived in West Texas most of my life, so I got a lot of Tex-Mex.”

He’s the first in his family to become an actor, Alejandro adds, although he observes, “I grew up in a very creative family – my father was a musician, my mother loved to sing, but I’m the first one to actually go out there and try to make it at what I do.”

At a CBS event for the Television Critics Association, Alejandro talks about GOLDEN BOY, plus SOUTHLAND, TRUE BLOOD and more.

ASSIGNMENT X: Can you talk about the differences in the approach to telling stories about the police between GOLDEN BOY and SOUTHLAND?

KEVIN ALEJANDRO: You know, one of the similarities between the two, actually, is I’ve noticed they both take stories from real cops, so that’s what’s similar between them. I think SOUTHLAND was groundbreaking in its style and just did an amazing job for what it’s doing, and I think GOLDEN BOY is also one of those examples, especially for CBS procedurals. I think it’s going to create the next level for what these kinds of detective shows could be.

AX: Do you think Christian might ever want to redeem himself in the eyes of his colleagues?

AX: Christian is a very sharp dresser. Do you dress like him in real life?

ALEJANDRO: You know, when I go out to things like this [press events], I love nice things, but when I’m at home, I’m a surfer, I walk around in flip-flops and shorts. But I did have a little influence on what my character is wearing. I felt from the very beginning, from the moment I was auditioning for it, I was like, “This guy has got something.” Because he is a street guy, he’s got his swagger, there’s got to be something else behind it. He’s like a gangster, pretty much – a modern-day, clean gangster. Three-piece suits, cufflinks. It’s all custom-made out in New York.

AX: One of the points of SOUTHLAND was that the amount of Los Angeles police proportionate to the population is very small. In New York, there are about four times more police than there are in L.A. Does that give your character any more – “comfort” might be overstating it, but a little more sense that there are people who have his back? Or is he so suspicious of everybody that having more fellow police just means there are more people out to get him?

ALEJANDRO: I think it’s a cop mentality. I have a really good friend who I’ve made during the season who is our on-site detective, Jimmy, and I think it’s a cop mentality. Always, no matter how many cops are on your side or out there, you’re always looking over your shoulder because of what they see. That’s why I particularly love doing cop shows, because how do you do it and go home again? During SOUTHLAND, it was like, “[How do you] turn it off and go home?” You can’t. You’re constantly looking over your shoulder, you don’t trust anybody, your doors are double-locked, you’ve got your gun. So I think there’s always a small amount of paranoia anywhere if you’re a police officer.

AX: And did you have to learn anything new for this role?

ALEJANDRO: Absolutely. First of all, the accent. I had to study an accent, just jump into a completely different mindset. And going along on the ride-alongs there [in New York], so much different from the ride-alongs out here [in Los Angeles]. My very first one out in New York, it was out in a place called Brownsville, I think, and we went to a two-person gang fight, they shot each other. And we were with the detective, and we went right over the lines, he flashed his badge, we walked right in and the bodies are literally about this close to me [indicates close proximity]. He’s lying on the ground, he’s dying, he’s in full cardiac arrest, they’re resuscitating him, and I’m this close and it’s in that particular gang neighborhood and everything’s blocked off, but there are hundreds of gangers all around, just looking like at any moment – if someone was offended that the kid was laying on the ground too long, boom, anything could have happened. So just that adrenaline, that rush. That was the closest to it that I’ve gotten. This was like five months ago, right in the beginning of our move over there.

AX: Did the shooting victim make it?

ALEJANDRO: No, he died. And it didn’t even make the paper. The other kid that he got into a fight with, he got shot in the leg, but he’s so proud, he’s got all his gang buddies back there doing their thing, and he’s like, “I didn’t die – I got shot, but I didn’t die.” It was pretty intense.

AX: Do you worry about Christian’s longevity?

ALEJANDRO: Of course I worry. I love playing this character and it’s unlike any character that anyone’s seen yet. So I always worry about it. I get killed off in everything [laughs], so I hope it doesn’t happen any time soon.

AX: Will we be seeing you back on TRUE BLOOD, where your character Jesus is dead but not departed?

ALEJANDRO: You know what? TRUE BLOOD, you can see Jesus at any moment, I’m sure. It’s TRUE BLOOD. Everybody comes back. Absolutely. I love being part of that show. If the timing was permitted, and they just started shooting, so it looks like there could be a window for that to happen, if they wanted, I would absolutely go back.

AX: Last year was TRUE BLOOD creator Alan Ball’s last season as show runner on the series. How do you think he went out?

ALEJANDRO: You know what? I think Alan Ball goes out at the top of his game. I think he was overworked, he needed a break, he’s a workaholic, that guy. He’s the happiest when he’s working, and I actually had a conversation with him about it, and he’s like, “I need a little time to go sit on a beach somewhere and just not think.” And he went out and he’s rejuvenated and now he’s come up with the next thing, BANSHEE. And it looks amazing – the guy knows what he’s doing.

AX: Are you like that? Do you need downtime between gigs?

ALEJANDRO: I have what I like to call FOMO, which is Fear Of Missing Out. So by the end of this, I’m like, “I’m ready for a break,” and then three days go by and I’m like, “Okay, I need something right now.” Because I’m sure I’m missing out on the next thing. I love working, and for me, a week or two is enough of a break.

AX: Do you have any movies coming up?

ALEJANDRO: I have a couple coming out this year, I think. One is called TRUCK STOP and one is called MEDEAS, both independent films that hopefully will do well.

AX: Is there anything else you’d like to say about GOLDEN BOY right now?

ALEJANDRO: The only thing I want to say about GOLDEN BOY is this is the most fun I’ve ever had and the most I’ve ever connected to a group of people so easily. I love the opportunities that I’ve been given, and I take it and go with it and I hope that people appreciate it as much as I appreciate doing it.

WHAT DO YOU THINK OF GOLDEN BOY? COMMENT BELOW