The actress talks becoming a regular and the Monroe/Rosalee romance 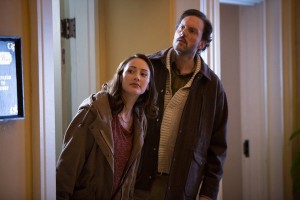 In GRIMM, just renewed for a third season and now on NBC Tuesday nights at 10 PM, David Giuntoli plays Nick Burkhardt. Nick is a Portland,Oregon homicide detective who is also a Grimm, someone who can see the hidden faces of Wesen, supernatural beings both good and bad. Nick tries to arrest (and sometimes must kill) Wesen malefactors, but he’s good buds with Monroe (Silas Weir Mitchell), a watchmaker who is also a Blutbad (a sort of werewolf).

Monroe has embarked on a delicate romance with Rosalee Calvert, played by Bree Turner. Rosalee is a Fuchsbau, a foxlike Wesen, who inherited a “spice shop” that also carries ingredients that can be used for potions, serums and the like. Despite the opportunities for mischief inherent her shop’s wares, Rosalee is sweet, ethical and upstanding.

Rosalee was not originally intended to be a series regular, but the onscreen chemistry between Turner and Mitchell was so strong when the character was introduced in the middle of Season 1 that by that start of Season 2, she was on board full time.

Turner, a California native, has a long list of TV and film credits. Horror fans will know her from her leading lady turn in the MASTERS OF HORROR episode “Incident On and Off a Mountain Road.” At a party thrown by NBC for the Television Critics Association, she talks about why Rosalee was made a series regular – and why the character then promptly went out of town to nurse a sick aunt for the first few episodes of the second season.

ASSIGNMENT X: You’re sort of like Michael Emerson on LOST –

AX: Well, insofar as your character wasn’t intended as a regular, and then you popped and the producers decided you should be part of the show.

TURNER: Yeah. I’m so grateful that the fans accepted my character. Especially being tied to Monroe – Silas has such a strong fan base and people love his character so much that I think it would have been very easy for them to reject me being attached to him in some way, but that hasn’t been the case. So I’m very thankful.

AX: When did you know that you were going to be a regular?

TURNER: The producers called me at home about a month after we wrapped Season 1, and I was waiting with bated breath. I always knew that was part of my deal, but it was up to them whether they wanted to take the character further, so I was thrilled that they did. I was five months pregnant [laughs]. They were very gracious.

AX: After you became a series regular, when the show came back for Season 2, Rosalee got sent away for a number of episodes. Was that so Monroe could be running the shop for her, where he was in a position to see some key incidents, or …?

TURNER: Honestly, it was because I was pregnant and I had to go have my baby [laughs]. That was where [Rosalee’s] sick aunt came into play. I had to go and deliver my child.

AX: Does he come to set with you?

TURNER: He will when we go back to work. I went back to work when he was three weeks old, and he was too little to bring him then. But I have a two-and-a-half-year-old daughter as well. They’ll be spending a lot more time with me up inPortland, so I’m sure they’ll be more in the mix.

AX: Some people play music for their unborn children or read to them –

AX: Do you have any concerns about your unborn child hearing some of the things on the GRIMM set?

TURNER: Right. How about the “Quill” episode, where I’m infected with the yellow fever and writhing and growling. I’ve been pregnant this whole series. When I booked the job, I [was] pregnant, so this baby has got a lot of GRIMM energy inside of him [laughs].

AX: When you look at the episode, what do you think of how Rosalee looks when she’s in her foxlike Fuchsbau phase?

TURNER: I love it. I was nervous. I didn’t see my morph, my actual CGI work [the transformations are done via computer effects, rather than makeup], until it was on the air, and being a fan of the show, I was watching, and all the creatures are pretty gnarly-looking, so I was anticipating a really heinous face, and I thought they made me very cute. I really like my little creature face.

AX: Once you saw Rosalee’s Fuchsbau face, did that inform the performance at all?

TURNER: It did in a way, honestly, because even though Rosalee’s past is filled with dark times, I think in her soul she’s a really sensitive, sweet, good person who has a lot of empathy, and I think that comes out in the creature form. She’s very gentle.

TURNER: Oh, for sure. It’s my space, so I do. As an actor, it’s your job to make the environment real for yourself, so yeah, I try to go in there and make it real and really have a relationship with the set.

AX: Is there any kind of research or preparation you do for the part, like – I don’t know, chopping parsley to rehearse for when Rosalee is preparing a potion?

TURNER: Yeah. I think it’s key to rehearse those things. We don’t have a lot of rehearsal time on set, because everything’s so fast-paced, so I try to take the time, either at home or early with the prop guys, to make sure everything looks natural and real.

AX: Nick and Monroe found out earlier this season what the audience already knew, which is that Nick’s boss Captain Renard, played by Sasha Roiz, is Wesen. Does that revelation affect Rosalee at all?

TURNER: I think it affects me in the way that my relationship with Nick becomes very close and he becomes a real true friend to me, so I’m affected by all these things that are happening to Nick, so in that way, yes.

AX: How would you describe the Rosalee/Monroe romance?

TURNER: Very true, I think. I think on television romance is quite heightened and escalated, and [in contrast to that convention, Rosalee and Monroe have] a slow-paced romance. I think that was very honest, and it’s a joy to work with Silas that way, and he’s obviously delicious and a tall drink of water, so it’s not hard to have to pretend to have googly eyes for him.

AX: Do you have any other projects, movies that are making the festival circuit or TV episodes of other shows?

TURNER: I’m in this film called SMASHED that was at Sundance this year. Mary Elizabeth Winstead is the star, she’s been getting Oscar buzz for her performance. I play a crack addict, which is really fun, and we won some awards at Sundance, and it was really exciting to be part of that. And I was on a show called THE WEDDING BAND on TBS, I had a great role in the pilot.

AX: And what would you most like people to get out of GRIMM going forward?

TURNER: Oh, I just think, get on for the ride, embrace the fear, embrace the creep, it’s only going to get more intense and more fun, so I think people are going to be really happy.