The actor talks about playing an old-fashioned Wesen 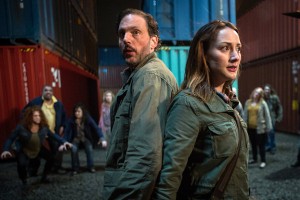 NBC has just renewed GRIMM for a third season. The series, which just aired its season finale and returns to Fridays in the fall, deals with Portland,Oregon police detective Nick Burkhardt (David Giuntoli), who has discovered that he is one of the title entities. Grimms are people who can see the true faces of Wesen (pronounced “Vessen”), a wide-ranging group of supernatural beings who usually appear to be human.

Nick has become close friends with a Wesen clockmaker named Eddie Monroe, played by Silas Weir Mitchell.Monroeis a Blutbad, a wolfish sort of Wesen, who is romantically involved with the foxlike Fuchsbau Wesen Rosalee, played by Bree Turner. This season, Nick has been coping with the fact that his girlfriend Juliet (Bitsie Tulloch) is the victim of a spell that has caused her to forget him. However, it was Monroe who got the huge shock of discovering that the spell also caused Juliet to begin having a compulsive affair with Nick’s half-Wesen police captain boss (Sasha Roiz).

Mitchell, originally from Philadelphia PA, has an extensive resume that includes FLAGS OF OUR FATHERS on the big screen and PRISON BREAK, MY NAME IS EARL and DEXTER on television.

At a party thrown by Fox for the Television Critics Association, Mitchell finishes up a conversation with Marilu Henner (of the fabled TAXI), and then comes over to discuss his GRIMM gig.

ASSIGNMENT X: Did you and Marilu Henner know each other already?

SILAS WEIR MITCHELL: It was the first meeting.

AX: She beckoned you over. Is she a fan of GRIMM?

MITCHELL: I don’t even think so.

AX: On the topic of GRIMM, this season Monroe has been asked by Juliet to keep a lot of secrets from Nick. Were there any moments where you, reading the script, were afraid, “Oh, my God, Nick is going to think that Monroe and Juliet are having an affair”?

MITCHELL: Yeah. Very, very small, passing – yeah. But that’s like subtext of subtext. Yeah. When your woman is cheating on you, everybody’s a suspect.

AX: Monroe also had quite a big shock when he found out that Juliet’s secret lover was Nick’s boss. How is it playing someone dealing with that kind of big surprise, versus smaller surprises?

MITCHELL: Well, in our lives, a lot of things are surprises. Like talking to Marilu Henner was a surprise. Life is a series of surprises. So on a dramatic level, you just take it in relation to the other surprises in life, big or small. So you don’t play them any differently, they’re just experiences that are on a scale, whatever they’re on, based on the story.

AX: And have you as yourself – what have been the most surprising plot twists for you that we’ve seen?

MITCHELL: The fact that [Nick’s] captain is half-Wesen – shocking.

AX: Were you pleased when they made Bree Turner’s Rosalee as a regular this season?

MITCHELL: Oh, totally. I love her. We have a great time working together, we have great chemistry, she’s a delight to be around on the set. Yeah, it’s nice to have a romantic something-something. I always play crazy, f***ed-up – it’s nice to have a little soft side.

AX: And do you like how the Monroe/Rosalee romance is depicted?

AX: What’s been the most complicated physical stunt thing they’ve had you do so far as Monroe?

MITCHELL: Nothing. Nothing’s been terribly … I was thinking if I’ve done any wire work, but I don’t think I have.

AX: We don’t know if Monroe can jump very high – has that been established, if he can make big physical leaps?

MITCHELL: Well, when I’m morphed out, I can probably do some pretty wolfy leaping, yeah.

AX: But if that is shown, it would probably not be you making the actual leaps.

MITCHELL: That’s why God made stuntmen.

AX: Have you learned anything new for GRIMM?

MITCHELL: I learned how to play the zither.

AX: Are you self-taught?

MITCHELL: You couldn’t learn to play the zither in five years, that thing’s so complicated. But being involved in playing a little cello, playing a little zither, learning about clocks. That’s the fun thing about acting – you’re playing pretend, and then you investigate the things that you’re asked to do, and you learn a lot.

AX: You’ve played a number of disturbed characters. Is Monroe the most grounded person you’ve played so far?

MITCHELL: No, probably not the most grounded. I wouldn’t sayMonroe is grounded, but he’s certainly – adjectives are hard. I don’t want to qualify him, but he’s very unique. I loveMonroe. I have a very soft spot for him.

AX: Now that you’ve done two Comic-Con panels for GRIMM, how is the rock star experience?

MITCHELL: Oh, it’s great. It’s great when you make contact with an audience.

AX: When you knew GRIMM had been picked up for second season last year, did you feel relieved or just gratified?

MITCHELL: That was the best moment of the whole thing – feeling like you’re not auditioning any more. Because you’re auditioning constantly in this business – you’re always looking for somebody’s approval. And even when they picked up the back nine in the first season – that was a little bit of a relief, but still, you’re not done. And when they picked us up first for a second season of all the shows on the network – early, it was March or something, that to me was like, “All right, we’re in, we’re done auditioning, we’re on the bus and we can really just get down to work.”

MITCHELL: Well, first and foremost, fun. They should have fun. Beyond that, there’s a metaphor about human life, how human people are, what they hide, who they really are. It really is fun. It’s a creature feature.