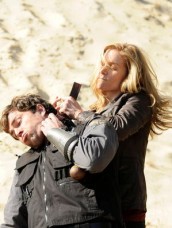 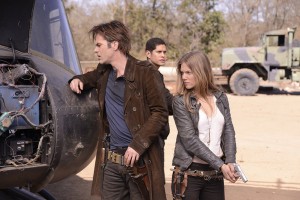 Three weeks ago, REVOLUTION delivered one of the best episodes of the season with an emotional and action-packed revealing episode that brought Miles (Billy Burke) and Monroe (David Lyons) back to their hometown. The last two episodes were back to the same villain of the week or survival story of the week progressing the show at a snail’s pace.

This week’s episode, “Clue,” continued this downward spiral once again for this show as they decided to turn one of the characters on the show that they spent an entire episode recruiting earlier in the year because he was a badass killer. Jim (Malik Yoba) turns out to be a traitor because the Militia took his wife and has been giving the bad guys intel for a number of weeks, because of course he did.

Why even bring this guy on the show? It isn’t like he brought anything interesting to the show that wasn’t already on the show. He was a guy who is good at killing people. Well, Miles saves everyone on the show all the time because he’s great at killing people. So why, if they were just going to turn him anyway, even bring him on the show? Why not instead focus on the emotional aspect of what is happening and the circumstance that they are forced to live in? Or focus on a small town that is doing something interesting in the midst of no power? Or something strange happening because of no power? Anything but bring another character onto this show only to turn him into a traitor and kill him because the producers think it would make for good television.

It doesn’t. That’s the problem with REVOLUTION. For every few steps that are taken forward (and there are very few), they take another 10 back. I get that you have some 20-something episodes to fill but certainly we can come up with better television. Certainly we can have a show that actually live up the potential that this show could deliver?

The entire premise of “Clue” was that Miles and crew were headed to “The Tower” in order to help Rachel (Elizabeth Mitchell) and Aaron (Zak Orth) try to turn the power back on. Monroe is also there because he found out about this from torturing Nora (Daniella Alonso), who conveniently was only in his grasp for one-quarter of one episode after some random dude rescued her for unknown reasons – it’s ok he died in this episode too so we don’t have to probe too deep into this overused subplot this show keeps running.

Along the way to The Tower, they run out of gas and land in their helicopter – powered by a necklace the dude who rescued Nora gave them – only to have a bunch of red shirts sliced and diced. So they spend the rest of the episode trying to learn who did it and that’s when the whole lame bit with Jim comes into play.

The ending was at least interesting with Rachel bringing a grenade into Monroe’s tent in order to get the revenge she so wants on him. Hopefully with only two episodes left it will improve but we’ve been hoping that since after the “Pilot” episode.