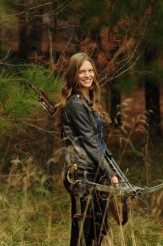 The actress talks about playing a hero on a quest 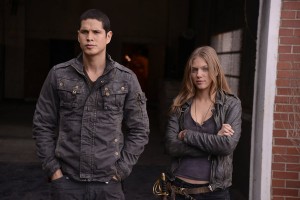 In NBC’s REVOLUTION, Monday nights at 10 PM, all the electricity in the world went out fifteen years ago. Tracy Spiridakos’ character Charlie Matheson is a young woman who has lived nearly her whole life in this brave new world. Now she, her uncle Miles (Billy Burke) and their allies are on a quest to find out what’s actually happened. The good news: some people have electrical power again. The bad news: the people who have the power are very, very bad.

Spiridakos, a native of Winnipeg, Canada, previously worked for REVOLUTION creator Eric Kripke on his series SUPERNATURAL, was a series regular in MAJORITY RULES and played Brynn the pureblooded werewolf on Season 2 of Syfy’s BEING HUMAN.

At a party thrown by NBC for the Television Critics Association, Spiridakos sits down to talk about playing someone who’s trying to save the world.

ASSIGNMENT X: Did you have to do running, jumping, shooting as part of your audition for REVOLUTION?

TRACY SPIRIDAKOS: Not in the audition. In the audition, we kind of got more into the nitty-gritty of the character, the emotional parts of her, more than the action stuff.

AX: Do you feel that, besides Billy Burke’s character Miles being the uncle of your character Charlie, that the two of you are related by bad-assery?

AX: Were you familiar with the work of everybody involved? Were you a particular fan of executive producer J.J. Abrams from LOST or series creator Eric Kripke from SUPERNATURAL or pilot director Jon Favreau IRON MAN?

SPIRIDAKOS: Yeah. I was obsessed with ALIAS, [which] was my big J.J. Abrams show, and then I’ve recently gotten into LOST as well, which is fantastic. But STAR TREK is great – he’s brilliant and Eric – I was actually in SUPERNATURAL earlier on in my career. I was in the episode called “Bedtime Stories.” I played one of the nurses. So I was filming in Vancouver awhile, I was in that as well, so a big fan of that. And Jon Favreau is fantastic. As an actor, as a director, in all that he touches. 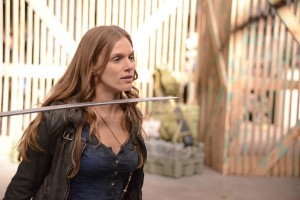 AX: You said you’re a big fan of ALIAS. Do you see any of Jennifer Garner’s character Sydney Bristow in your character Charlie?

SPIRIDAKOS: I don’t know. I mean, the fact that they’re both kind of determined, warrior type of girls, I guess, but you can identify that with Luke Skywalker, as well, who’s a determined kind of guy going after what it is that they set out to do. You could say there are elements that are similar between her and Jennifer Garner in ALIAS. There are similarities all around. You can compare it just as closely to Luke Skywalker if you want to.

AX: Bringing up Luke Skywalker, do you feel like Charlie could have been male? I mean, do you feel at this point there is anything that requires her to be female, or do you feel like you’re getting a part that’s is simply a good part and not about gender either way?

SPIRIDAKOS: I feel like it’s a good part. I feel like there’s a lot of richness to her that is the vulnerability and the warrior, and there’s a lot happening with her. As far as it being male or female, maybe because I’m in it and I like it, but I don’t know. I’ve been growing up with boys my whole life. Put me in, Coach. I can play [laughs].

SPIRIDAKOS: This has been my main thing that I’ve done. I did an indie, KILL FOR ME, a little while ago.

AX: And what would you most like people to know about REVOLUTION?

SPIRIDAKOS: REVOLUTION is a fun, epic journey. We’ve all said that a lot, but you’re going to get involved, you’re going to jump in just as we have, being a part of the project, and I can’t wait to read the scripts every time we get them, every week, to find out what’s going to happen next.