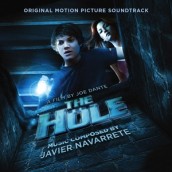 Kids and the monstrosities often mixed in Joe Dante’s legendary collaboration with Jerry Goldsmith, from mischievous GREMLINS and SMALL SOLDIERS to the atom bomb in MATINEE. One might imagine what Jerry would have done had he been around to peer into THE HOLE for Dante, only to find far more of an ephemeral and psychological threat than he’d been given to handle before with the filmmaker.

Yet Dante’s still in very capable musical hands for a low key entry into teen horror, especially with the heavy lifting being done by Javier Navarette, a composer who teamed with Guillermo Del Toro for the far more fatalistic “PAN’S LABYRINTH and THE DEVIL’S BACKBONE. Given the more obvious tone of these American goosebumps, Navarette conjures the tonal equivalent of a spooky suburban backyard campfire tale.

While there’s the kind of pleasant lead-in that brings images of sunny childhood innocence, the musical light is quickly consumed by whatever the hell it is that lies under our young hero’s basement grate. There’s a wonderfully macabre vibe to this evil’s ever-growing grasp of an unfortunate family, with an eerily definable theme standing in for the creeping darkness. Navarette’s music personifies itself as a veritable witches cauldron of scratchy violins, will-o-the-wisp strings, a haunting orchestra and a chilling female voice, all of which cast an ever-intensifying spell that plays nicely off of Dante’s nostalgia for old-school Universal horror chills.

But above all, Navarette doesn’t fail to maintain a sense of innocence and emotion, as captured with a lush, piano-topped theme. Sure this score might not be as ragingly dark as his fellow Spaniard Roque Banos’ score for EVIL DEAD (also out on La La Land), but THE HOLE’s music is certainly menacing enough to help warrant this nicely modulated film’s PG13 rating. Navarette’s certainly kept the spirit of Jerry alive within THE HOLE, all while going in a fresh direction for Dante, one that will hopefully continue to shine its light.

Clink on the link to buy THE HOLE soundtrack