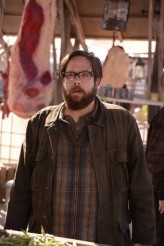 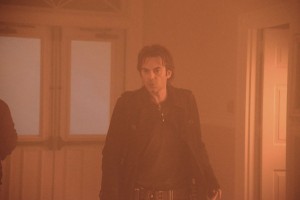 In one episode, REVOLUTION was able to bring some of the emotion that should be in this series back to the forefront in “Home.”

One of the things that has been sadly missing in this show is any emotion as a result of the actions of the people in the cast. Every regular of this series has had something terrible happen to them after the lights went out. Mostly, this was the result of their own actions. But little is every brought to light how these actions and terrible things has impacted them.

“Home” changed all that. Not only did we get more back story to the relationship between Monroe (David Lyons) and Miles (Billy Burke) in a childhood relationship where both vied for the same woman, Emma (Annie Wersching). This gives credit to the whole reason why both are at odds or at least fell out of favor. Sure, it is not the only reason but at least it is a partial reason, something we have yet been given many clues to. All we know is that Miles and Monroe established the Militia and at some point Miles backed out of the deal because he couldn’t stomach the brutality of the group.

Monroe wanting to end the leadership of Miles in the resistance as well as from the Georgia army, flushes him out by flying to Monroe and Miles’ hometown and threatening to kill everyone in the town if he does not come alone and surrender. Monroe once again meets Emma and at first almost seems like he might show some sympathy. That’s quickly gone as he orders the entire town to be burned down in a building including Emma.

Now, of course, we get a Miles rescue which seems to be the formulaic answer to everything in this show but at least this time it works as he is fighting for people he actually knows and cares about. However, there was a neat switch that while predictable worked and set the whole series of events for Monroe into a tailspin. Now, theoretically, this should alter his whole life. You learn you have a son with a woman that you loved from your childhood only to have her die because of your own actions.

I think that might be the case if Jon Cassar was directing all the episodes. Cassar directed this episode, which is by far the best since returning, and he also directed the best episode from the first half of the season and, of course, one of the main dudes behind the 24 franchise and why that series kicked major ass. However, I doubt he will be doing all of the directing duties although it would be great if he would. It was also nice to see Annie Wersching, who starred as Renee Walker on 24 for a few seasons while Cassar was directing/producing, get some work

There was another subplot that got wrapped up in “Home.” Aaron (Zak Orth) found his wife in a small village but it was a far from glorious reunion as she seemed to have gotten herself in trouble. Of course, the plotline began when Aaron left his wife for fears that he could not protect her. We learn that his wife has a new family in Texas and was on her way there before getting jumped by some bounty hunter. The good news about this is that this subplot is pretty much resolved, which is something rare in this series.

Now that Revolution has been officially renewed for a second season hopefully we will see more episodes like this that have more heart while staying with some of the action that has deluded this series up until this point.