dancing with the stars season 16 winner 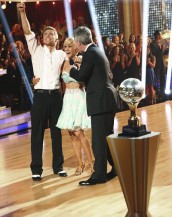 DANCING WITH THE STARS Recap: Season 16 Winner – Pickler takes it all! 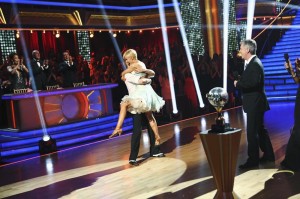 In one of the closest competitions DANCING WITH THE STARS has ever had Kellie Pickler & Derek Hough have won DWTS season 16, marking Hough’s record 4th win on the show.  Front runners Zendaya Coleman & Val Chmerkovskiy came in second, while Jacoby Jones & Karina Smirnoff came in third and Aly Raisman & Mark Ballas came in fourth.

Highlights of the night reminded us of what an emotional and exciting season it had been with the women continually out performing the men. Exciting performances by Psy, Pitbull and Jessica Sanchez alleviated some of the tension throughout the show. It seemed to be in Coleman’s & Chmerkovskiy’s favor all night long as they led the scoreboard with points, but only by one, over Pickler & Hough. And when the final three couples danced their last dances, all three scored perfect 30s, making the outcome even more undeterminable.

Ironically, Hough had previously stated that he was not returning for season 16 but something had pulled him back. He later decided it was Pickler, herself, who was that “something”. For now, the stage is closed. See you in the fall!