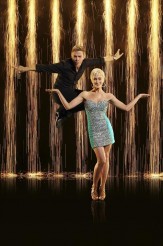 Stevie Wonder and the group dance on DWTS!

DANCING WITH THE STARS: week six kicked off the night with Stevie Wonder week. Some stepped up to the challenge, others crumpled. But, it was the group dance that shot the leaders to first. Kellie Pickler & Derek Hough came out on top with 54 points out of 60 tonight while Aly Raisman & Mark Ballas came in second with 52 points. Rounding out the top three, yet again, was Zendaya Coleman & Val Chmerkovskiy who earned 51 points.

Team Paso Doble lacked the expert technique desperately needed for good scores, receiving just 22 points for their effort. While Team Samba faired better with a respectable, but not extraordinary, 25 for their routine.

Andy Dick (Actor) and his partner Sharna Burgess
He tried his hardest to shake it! Goodman said he always gives the audience fun. Tonioli said his Samba was personality driven. Inaba said it was a little thrusty.
Scores: Inaba – 6, Goodman – 6, Tonioli – 6, Harland –7

Victor Ortiz (Boxer) and his partner Lindsay Arnold
He was stiff like a board. Goodman said he had a fighting spirit. Inaba saw the sparkle in his eyes. Tonioli said his hips were on neutral for his Samba.
Scores: Inaba – 6, Goodman – 6, Tonioli – 6, Harland – 6

Jacoby Jones (Football Player) and his partner Karina Smirnoff
Mr. Charismatic! Goodman told him to work on his footwork. Tonioli said his energy was amazing in his Quickstep. Inaba told him he surprised her.
Scores: Inaba – 8, Goodman – 7, Tonioli – 8, Harland – 8

Kellie Pickler (Singer) and her partner Derek Hough
Totally in sync! Goodman called her Quickstep the best dance of season 16. Inaba criticized the space in her hold. Tonioli said she had the best quality of dancing.
Scores: Inaba – 9, Goodman – 10, Tonioli – 10, Harland – 10

Sean Lowe (Reality TV Star) and his partner Peta Murgatroyd
Too bouncy. Goodman told him to set his sights higher. Tonioli said he can always get  a job as a stripper. Inaba said he showed so much potential in his Samba.
Scores: Inaba – 7, Goodman – 7, Tonioli – 7, Harland – 7