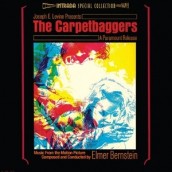 Elmer Bernstein was a composer who could wear many stylistic hats to fit his often over-sized characters, whether it was conjuring a biblical symphony for Moses or gun-blazing western music for John Wayne. But if I have a personal favorite approach, then it’s the Bernstein of the late 50s and early 60s, a time when jazz stood for bad behavior. Bernstein mainlined that hep, untamed sound with the more mainstream sound of an orchestra to create the defining sound of “movie jazz.” It was a deliciously swaggering approach that captured the morally bankrupt doings of heroin addicts (MAN WITH THE GOLDEN ARM), prostitutes (WALK ON THE WILD SIDE) and publicists (THE SWEET SMELL OF SUCCESS).

But perhaps no handsome sleaze was more outsized than George Peppard’s ersatz Howard Hughes for 1963s THE CARPETBAGGERS. Harold Robbins’ thinly veiled portrait of a 30s oil baron cum movie tycoon set the tone for the Hollywood adaptations of author’s many sex and sin epics to follow like THE BETSY and BLOODLINE. But when you could only so much skin on screen (even for a then-provocative movie), Bernstein’s music was a major factor in capturing THE CARPETBAGGERS‘ lustful energy, as driven by a powerhouse, carousing theme that once again equated jazz with carnality in the best way. But there’s also a dynamic range of approaches here, from the ride-the-range rhythms of our anti-hero’s cowpoke confidant Nevada Smith (later to get his own, pure western), rollicking period source and the kind of careening orchestral energy that’s the stuff that rise-to-the-top montages are made of. Yet behind the score’s brassy soap opera relish, Bernstein also captures an unexpected, melodic tenderness where a flute plays how this cad actually possess a very tarnished heart when he isn’t breaking a host of shapely ones. Intrada’s release captures the powerhouse sound of Bernstein at his racy best, compiling the original CARPETBAGGERS tracks with its re-recorded album, for which Bernstein created special jazz-centric suites of his thematic material. By giving an even smokier feeling to the elegant sleaze at hand, I dare say that Bernstein’s LP trumps the “real” tunes in terms of their deviant enjoyment that made this composer the king of musical bad behavior back in the day.

Clink on the link to buy THE CARPETBAGGERS soundtrack