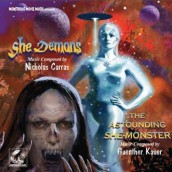 It's double female trouble for this retro soundtrack delight

When you want the best in shrieking, old-school genre music, then Monstrous Movie Music has been the place for any Famous Monsters fan to geek out to, as the label has gone from sumptuous re-recordings of the likes of GORGO, DAY OF THE TRIFFIDS and THIS ISLAND EARTH to releasing the original recordings of fairly prestigious genre fare like ROCKETSHIP X-M and KRONOS. They’ve even dared to branch out with such distinctly non-monstrous Ernest Gold releases as SHIP OF FOOLS and THE McCULLOCHS.

Now MMM goes digging into the vault of 1 AM Chiller Theater fare, not to mention whatever happens to be running at that time on your local UHF station.

It’s certainly their most gonzo bunch of releases, with manly adventure trumping beastly action in their releases for the blazing guns of THE TALL TEXAN, the Amazonian exploitation of VIRGIN SACRIFICE and the civil war era drama HELLGATE. But for true-blue fans of black and white exploitation, the go-to soundtrack of the bunch proves to be the double-teaming of the freakish SHE–DEMONS and THE ASTOUNDING SHE-MONSTER one a bunch of ladies with faces that only a gorilla could love, and the latter a space-suited vixen whose touch is to die for.

You know you’re in for something off the beaten track when jungle drums and a raging mini-orchestra send you to an Nazi-ruled island hell populated by beauty queen contestants who certainly aren’t going to win any prizes now. Having certainly warmed up for this picture with FEMALE JUNGLE and JUNGLE HELL (and with the likes of THE ASTRO-ZOMBIES and THE DOLL SQUAD ahead of him), composer Nicholas Carras pours on the enjoyable, alternately lurching and pouncing music with exactly zero subtlety, which is what makes many of these scores for the 50s more lowbrow genre efforts so much fun. 1958s SHE DEMONS music is fairly interchangeable with Carras’ deliciously strident MISSILE TO THE MOON (also on MMM). But what really perks this nutty ready-for-Ed Wood stuff up are the score’s excursions into jungle horror exotica and war-whoop brass, the music so furious that you can almost feel the punches of the abusive Huns’ fists coming at you, as well the twisted claws of the Diane Nellis Dancers.

1957s SHE-MONSTER was given a way-smaller budget to restrain most of its action to a geologist’s mountain cabin, where a silver-suited babe from beyond the stars inadvertently foils a rich dame’s kidnapping. However, German-born composer Guenther Kauer (aka Gene Kauer) seems to think he’s Bernard Herrmann, whilst in the midst of scoring the high sierra-set ON DANGEROUS GROUND. That kind of distinctive musical ambition is a very good thing when it comes to elevating silver-suited eye candy and a rather un-astounding film. Though Kauer’s cliffhanging energy has panicked horn cries and frantic strings aplenty, the composer certainly isn’t guilty of the sin of writing “busy” music. There’s an actual thematic intelligence at work to his debut score, with the horn section achieving the kind of thrilling, rhythmic motion of an “A” picture score within decidedly “B” movie confines. Better yet, Kauer’s smashing theme, creeping suspense and high-string sense of female jeopardy does wonders at expressing the misunderstood, fairly melodic menace of a character who’s only monstrous in inadvertent deed. At its best, Kauer’s music doesn’t sound so much like a horror sci-fi score as much as it does a ballet piece with aspersions to Stravinsky’s virgin sacrifices. With the score conducted in Kauer’s native Germany, the sound has a surprisingly terrific crispness that’s unusual for fare from the era. It’s a shame that Kauer’s career mostly didn’t rise about exploitation fare. But leave it to MMM head David Schechter’s always-elaborate, and humorously enjoyable liner notes to give this truly unsung composer his due, while wetting our appetite to hear what other screwball gems MMM might unearth from the bottom of a double drive-in bill.