The actor also talks about being a werewolf on DIARIES 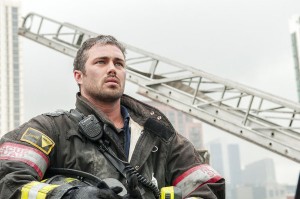 On CHICAGO FIRE, in its first season NBC Wednesdays at 10 PM, Chicago firefighter Kelly Severide is having quite a year. First he was feuding with fellow first responder Matthew Casey (Jesse Spencer) over who was responsible for the death of a friend and fellow first responder. Then Severide suffered a back injury, which he hid from the department. The secrecy and physical pain led to Severide getting addicted to drugs. Finally, he had experimental back surgery, and lately he’s engineered a reunion between his ex-fiancée and her brother.

In short, Severide’s been through a rough time. However, Taylor Kinney, the actor who plays Severide, sounds like he’s having a wonderful time portraying Severide’s travails. This isn’t Kinney’s first stint playing a first responder – the Pennsylvania native was a series regular on the 2009 paramedic drama TRAUMA and he’s known to genre audiences for playing werewolf Mason Lockwood on THE VAMPIRE DIARIES. He can also currently be seen on the big screen in multi-Oscar nominee ZERO DARK THIRTY.

Severide and Casey have buried the hatchet, but Kinney describes how the two are when we meet them at the beginning of CHICAGO FIRE. “It’s been a healthy rivalry over the years, so the accident serves as a catalyst for that tension between the two of them. They start off when we see them in earlier times, maybe comrades, if you will, and then something happens to start this tension overload and it’s a blame game. These two characters are similar in that I’m the lieutenant of a squad company, he’s the lieutenant of a truck company, they’ve worked excessively hard to get to where they are, they’re great at what they do and maybe a little too stubborn at times. So when it comes to blame game, pointing fingers, that’s where we’re at, that’s where we see, ‘I did my job, why didn’t you do yours?’ ‘He did his job, why didn’t I do mine?’ And that’s what starts the tension between the two of them. And because they’re stubborn, when they go in and they work together, they can work as one unit, but when they go their separate ways, when they go to the firehouse, it’s not necessarily them wearing their emotions on their sleeves and wanting to hash it out over a beer or coffee, because they’re not going to do that.”

CHICAGO FIRE films in its title city, something else that makes Kinney very happy. He is briefly inLos Angeles to discuss the show with the press. 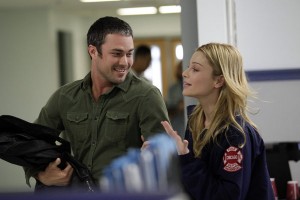 ASSIGNMENT X: What were your experiences like riding along with real Chicago firefighters?

TAYLOR KINNEY: With the ride-alongs in Chicago, I love that. I did a lot of carpentry work growing up, I spent a lot of summers on roofs and framing and I like to see my work, I like to sweat, I like to use my hands. So getting a role like this and an opportunity like this to play a firefighter – I could see myself in that profession. I have a high respect for these guys. So getting to do the ride-alongs, we’d spend twenty-four hours with them. We have some gear, we’d suit up, we’d go to calls, we’d go to bigger calls, we’d go to smaller calls, we’d go to gun shootings, victims, we’d go to potential jumpers in the city, and a lot of the firefighters – I think for the most part now it’s almost mandatory that they have EMS [emergency medical service] training, so they’re there, paramedics are there, cops are there – and being on a shout with these guys, that’s one element. [Someone asked] about how much downtime they have. And it’s one of those things where they get paid for what they can do a lot of times, but not what they do do. So you may have a day or a stretch where it’s really low-key and you don’t have many calls, but then you may have a big structure fire, a big event where you have kids, a lot of people in a building, and no one else is going in there, so when that comes and you see what these people are capable of, and then go past it and go above and beyond, that’s where your respect grows and as an actor, you want to do your best job to portray them in a positive way.

AX: How real does your training for the role get?

KINNEY: Simulated [fires], yes, but we weren’t jumping into burning buildings [laughs] and having them say, “Just have at it and figure it out.” It wasn’t like that. We had a lot of training and under supervised circumstances, and for the ride-alongs, I think a few of the guys got to calls where there was a fire, and they would wait outside. They weren’t running in.

AX: How did you get in shape for this role?

KINNEY: A lot of these guys, they’re big guys. A couple of them are ex-football players, and it’s more of a [when they can make time for it] thing. These guys, they’re not running marathons. I don’t really have one [a workout routine]. I run a little bit.

AX: Were you able to do everything the role called for the first time you tried it?

KINNEY: I’ll speak for when we were doing training at the academy. They had us gear up with the full gear, with air, mask, hat, gloves, boots, everything. It’s maybe sixty, sixty-five pounds. And then you go through a simulated exercise where you’d be in an environment in a house where there’s smoke and fire and you’re clearing a room. You’re looking for victims. For the most part, we had it blocked out where we could do this in a room with our gear on without the elements. And then [once the elements are added] you walk into a smoke-filled room that’s over a hundred and fifty degrees, two hundred degrees, and it’s a shock to the senses. You really can’t see four feet in front of you. So even with the little training that we had, it really is amazing what these guys do and what they’re trained to do and how they can without eyesight or what have you. So you have a hand on a wall or a foot on a wall and not knowing if you’re in a closet space or another room and then connecting with your fellow firefighters. I think that was the most shocking thing that I’d gone through in training.

AX: You said firefighting is a profession you might like to do if you weren’t an actor. So do you think you could adjust to those elements over time?

KINNEY: Yeah. I liken it to when I was in college, I boxed for awhile. I got into boxing. My grandfather was a big boxing fan. So we would watch on TV, and you would see a fighter in the sixth, seventh round start to get fatigued, and then you’d cheer for this fighter and you can get carried away without a firsthand experience of what that’s like in a ring in the seventh round. And when I started boxing, I started out doing three-minute rounds and by the end of that third round, you could barely put your hands up. It’s the same thing with a firefighter. I’d look at it and say, “I really want to do that. And I could do that.” And then the first onslaught of an experience training, you realize how difficult it is and how much training they have. So having a firsthand experience even on a minimal scale just raises your level of respect for the job and the career.

AX: You grew up with three brothers. Does that help you play the fraternal dynamic within the firehouse?

KINNEY: Sure. It’s just kind of busting each other’s balls. You talk s*** and you get into fights and you do all that at a firehouse. It’s the same thing.

AX: How is making a series in Chicago?

KINNEY:Chicago in itself, that’s the thing, like [executive producer] Dick Wolf was saying, it’s not a fire of the week show. The city ofChicago serves as a character in its own right. Because we utilize locations where the firefighters that we have and the men and women that serve as guides in helping us along and helping with how you go about the job are locals and city ofChicago residents. So there’s going to be a feel to it that you wouldn’t get if we were to shoot on stage inL.A.

AX: Might you go back to Georgia to do any more episodes of VAMPIRE DIARIES? Your character died, but that hasn’t stopped him from reappearing before.

KINNEY: I have no idea. I had such a great experience on that program and on that show and they leave things so open-ended. I think the last time, I got a call to come back and it was because of a witch’s brew or something. I don’t know [laughs]. [For CHICAGO FIRE], we could do something next year, Friday the Thirteenth, for a special episode and my character grows a tail and some claws and who knows.

AX: Can you contrast playing a werewolf with playing a firefighter?

KINNEY: In THE VAMPIRE DIARIES, my experience on that was, I watched the old Lon Chaney films, I watched the new Benicio Del Toro film [THE WOLFMAN] with Anthony Hopkins – you can watch so much, but it’s really a character in a genre where you’re not going to get much wrong. I could throw something way out and try something way left field, because how many werewolves are going to come up to me and tell me that I didn’t do it right? Whereas for this, it really is important to do your best job to portray these guys in a correct and positive way, how they conduct themselves, how the job is done. And again, it’s television, so you have a bit of creative license, so if there are a few days where not much is going on in a firehouse, we’ll have personal stuff. You’ll delve into these characters’ personal lives. We’re not going to light a skyscraper on fire every week.

AX: You’re also involved in charitable causes related to firefighters and their families …

KINNEY: Yeah. It was my experience on TRAUMA a few years ago – I got along really well with some of the firefighters there. So on my spare time and weekends, I would hang out with those guys, go on ride-alongs, and it meant a lot to me. There was a fundraiser about a year ago for a firefighter who fell into a bad situation and he couldn’t work any more. So we got together, we had a fundraiser, we raised a good amount of money and we had an auction to help his wife and his family. That’s not something that you want to think about every day. These people, they go in and they do this job and to see the things that they see sometimes, and to not bring it home, is a testament to who these people are. [There] is a newfound respect, but I’ve always been appreciative of the deal and the work and I’m honored to be a part of this show.