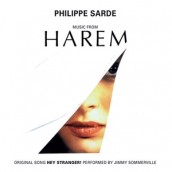 A Philippe Sarde relic from the 1985 Cannon production

For a bright, shining English language decade in the 1980s, French composer Philippe Sarde stood out as the beacon in the next wave of the romantic French invasion, a worthy successor to the likes of Georges Delerue and Maurice Jarre with his lush, thematic sound that graced such memorably diverse scores as GHOST STORY, QUEST FOR FIRE, LOVESICK, PIRATES  and THE MUSIC BOX. And while Sarde certainly hasn’t stopped working in the years since, there’s quality that stands out, and remains unequaled from his work during that period. It’s true from major Hollywood pictures to even lesser known Cannon productions like 1985′s HAREM.

Filmmaker Arthur Joffe took the age-old cinematic fantasy of getting ravished by a sheik to new existential dimension here, casting Nastassja Kinski as an American stockbroker who gets shanghaied to Arabia by Ben Kingsley’s aloof prince. For the film’s accent on an artily told “relationship” over soft core pulp, Sarde delivers a beautifully seductive, almost sweetly charming theme that’s impossible not to yield to. His melody fills the score with a leisurely, entrancing pace, much like a Middle Eastern boudoir. Sarde incorporates Arabic music into the sand and steam-swept ambiance, varying his melody from a classical trot to honeyed charm, with choral voices making the profane into a romantic sacrament. It’s a testament to Sarde’s incredible melodic talent that it’s a feeling of poetic innocence that ultimately sweeps us off of our feet. HAREM is all about the rapturous power that a great theme can have in the hands of a French master, the country from which it seems he best scoring Svengalis hail from. But perhaps the most ear-catching use of Sarde’s motif comes from the impossible vocal range of singer Jimmy Sommerville (ORLANDO), who’s operatic use of the melody in “Hello, Stranger!” turns from man to woman, and than a nearly-screaming falsetto that jams the two sexes together, much as if a eunuch was rocking out on the job. Sarde remains a composer that Hollywood needs to kidnap back to capture that symphonic genie in a bottle.

Clink on the link to buy the HAREM soundtrack