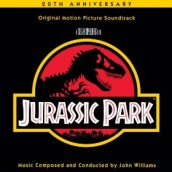 Williams classic score gets additional tracks for an E-release, with an extra dash of Bugs Bunny fun

By this point in a nearly four decade collaboration, John Williams’ DNA is as inseparable from the magic of Steven Spielberg as a moth encased in million-year old amber. And given a gigantic body of work whose themes are as instantly memorable, whether played with two notes (JAWS), five notes (CLOSE ENCOUNTERS OF THE THIRD KIND) or a plethora of them, it’s hard nailing down just what might be Williams’ finest melody for the director. But when it comes to his most singable theme, the award must go to JURASSIC PARK. God forbid this movie had come out when Meco was in STAR WARS disco sway, as the anthem-like melody has always seemed to demand salutably inspirational lyrics. But that’s only one reason for fans to sing, as Universal has done a spit-shine remaster on the score to accompany their 3-D polish of the movie’s landmark CGI bones, ensuring yet more theatrical and DVD viability while making Williams’ seminal music roar with new, ageless life.

Spielberg has always enjoyed playing the fine line between a sense of wonder and abject terror. JURASSIC PARK remains one of his most subversively effective moral fables on that end, showing how getting the ultimate dream vacation can be lethal. That also happened to be Michael Crichton’s original parable for WESTWORLD, whose premise he turned neatly from killer robots to a dinosaur park run amuck. John Williams cannily turned that metaphor into melody with a rapturous title, which sings of grand adventure, when what in fact what lies inside remains some of the JAWS composer’s most savagely primal scoring. In this musical dino-land constructed from superb themes, Williams uses glistening bells, sweeping strings and jungle drums to approximate tourists pointing with “Ohhhh-awww’s” before leading into the mysterious jungle flutes and low, snarling brass that stands for a T-rex and raptors on the prowl. Yet even with the horns at full, roaring blast, there’s no taking the boomingly lush sound out of the composer’s tell-tale voice, one whose gift for pure melody gets a full-sprint work out evading lizard talons with some of his most white-knuckled action writing. Yet for all of Williams’ exhilarating fury, my favorite cue remains the positively quiet “Remembering Petticoat Lane.” As John Hammond recalls the flea circus that started it all, Williams uses a slow, child-waltz of bells and melancholy strings to touchingly conjure the old man’s realization that bigger isn’t better. It’s a palpable, but gentle heartbreak rare for any blockbuster of this sort, though a given when it comes the earth’s mightiest composer-director partnership

Now that physical releases from major studio labels seem to have gone the way of the Dodo Bird, JURASSIC PARK  jewel case fossil collectors have been denied by the decision to release this deluxe edition on CD. Making up for it a bit are four previously unreleased, an unused tracks totaling about ten minutes. There’s a thematically sweet “History Lesson,” full of lilting strings and charmed bells, a tense “Coming Storm” which heralds a raptor break-out and a positively rocking orchestral charge for their theme in “Hungry Raptor.” But the highlight, and probably the biggest reason to visit the “Park” soundtrack again is “Stalling Around,” where Williams has a heyday creating deliberately obnoxious, and utterly hilarious cartoon music for the film’s dumbed-down dino DNA-explaining cartoon. So deft is Williams at playing science as Bugs Bunny gags that you wonder why what he would have done if ANIMANIACS could have afforded him