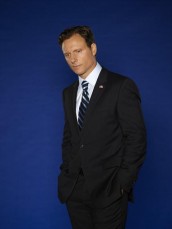 The actor talks about working on the hit show 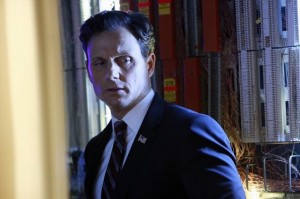 On ABC’s SCANDAL, renewed for a third season and airing its Season 2 finale tonight, Thursday May 16, U.S. President Fitzgerald “Fitz” Grant, played by Tony Goldwyn, has responded to an ultimatum by his wife Mellie (Bellamy Young) by leaving her for the love of his life, crisis management expert Olivia Pope (Kerry Washington). What will happen next on the show created by Shonda Rhimes? Stay tuned.

Los Angeles native Goldwyn, a grandson of famed producer/studio mogul Samuel Goldwyn, divides his career between acting and directing. On stage, he won an Obie for his work as a performer in THE SUM OF US; on film, he was the villain in GHOST; on television, he was Neil Armstrong in the HBO miniseries FROM THE EARTH TO THE MOON. As a director, Goldwyn has helmed the features A WALK ON THE MOON, SOMEONE LIKE YOU and THE LAST KISS, along with many episodes of a number of television series – including the “A Woman Scorned” segment of SCANDAL.

At a session for the press at the Pasadena Langham Hotel and later in the set of Fitz’s presidential office on a visit arranged for the Television Critics Association, Goldwyn takes some time to discuss playing the leader of the free world – who may yet be undone by his love life.

ASSIGNMENT X: What attracted you to SCANDAL initially?

TONY GOLDWYN: Shonda and Kerry, really. I’ve worked with Shonda – I directed some episodes of GREY’S ANATOMY – I admire her so much. When I heard that she and Kerry Washington were on this project, I got very excited. And also, television has transformed in the past five, ten years. It has the best writing on television, the best opportunity to do adult drama has been on television, so it just felt like the right moment. And the idea that it was the President, and I knew that Shonda would write a pretty interesting President. I had been such a huge admirer of Kerry’s work – I think she’s one of the greatest actresses, so that was almost a closer right there.

AX: Do you base your performance as Fitz on any real political figures?

GOLDWYN: The two people that have inspired me the most, in terms of reading about them and just watching their oratorical skills and their approach to people, would be Clinton and Obama, because I feel that Fitz is a very heart-driven president. The way that he approaches his life is of course an issue between [Fitz and his chief of staff Cyrus Beene, played by Jeff Perry, who] says to me at one point, “I wish you were more of a cynic.” I thought the wayClinton related to people was very from the heart – I wanted to bring that heart into Fitz. I was also watching the way that [Presidents Clinton and Obama] spoke. They’re genius orators, I think, even though they’re different.

AX: How do you and Jeff Perry work together? Do you feel you have a dynamic that’s distinct from your other scene partners?

GOLDWYN: Yeah, we did have a very natural team approach to the work. Much of what Shonda writes, there’s always so much more going on underneath it than what’s being said, so a lot of thought and discussion was required for us to figure out what exactly is informing any given scene or this episode, so Jeff and I, almost every time after we do a table read, go and sit for an hour or two and have a talk about it and get in sync, so that we were in sync, whether it was talking about our back stories or really just what the machinations were underneath, so we found a very team-oriented approach to the material.

AX: Everybody on SCANDAL tells lies at one point or another. Do you think Fitz means what he says on some level, even when he’s lying?

GOLDWYN: Always. I’m a little more transparent than I think Jeff’s character. I will willfully withhold things, mostly from him, not telling things with the unstated thing of, “I’m not telling you this, because I’m not having this conversation with you.” But pretty much when I say things, [Fitz] will go back on himself. He makes mistakes.

AX: Did you foresee any of the twists and turns in the storylines?

GOLDWYN: Even now, I’m always shocked. And the biggest thing is, Shonda’s making such bold moves in storytelling that several times I couldn’t believe how she was going to get us out of the mess that we were in. In fact, at one point in the first season, I was convinced she was going to get rid of me, because I thought when the sex tape came out, there was a scene in Jeff Perry’s office where he plays this sex tape to me, and I thought, “Okay, that’s it, because how can he recover from this?” I didn’t know that it was Olivia. I thought it was Amanda Tanner [Liza Weil]. Shonda was like, “No, we’re not killing you off!” [laughs]

AX: Fitz got shot and was comatose for an episode and a half. Did she tell you that time “Don’t worry”?

GOLDWYN: She didn’t have to. I had a suspicion [laughs] that the Fitz/Olivia relationship is so much a part of the show right now that I would have had to do something really naughty to get killed off, so I was fairly confident that Fitz would somehow pull through, but I didn’t know if I’d be in a wheelchair, or if I would be permanently disabled.

AX: Did you do any research into how people react to that sort of brain injury?

GOLDWYN: I did do a bit. I didn’t have a whole lot of time from the time that I knew that I got shot – sometimes what I do, just my process as an actor, I like to rely primarily on my imagination and then I’ll fact-check to make sure I’m not getting anything wrong. Because in my younger years, I would research everything to death, and then I’d come to the set and be completely like, “But this is how it actually is!” [laughs] And then you get kind of hamstrung by that. So I did enough that I don’t think people will watch it and go, “That’s not what he would do.”

AX: How do you think Fitz has been changed by that experience, if he has?

GOLDWYN: I think it’s the same Fitz. I think it’s just a clearer Fitz. I think he’s not going to be so buffeted, so easily manipulated, and he’s done playing games. Politics is a bare-fisted game, and Fitz has never had any illusions about that, and he can box with the best of them.

AX: Especially since you are director yourself, when you’re acting, do you ever ask the directors on the show, “What’s the camera angle?”

GOLDWYN: No, I don’t. I’ve found it makes me self-conscious. To me, I just want to be doing what I do [as an actor]. Sometimes I’ll want to know what the shots are so I can pace myself, so that I know how many pieces of coverage they’re going to do, so I can kind of know how many [takes] I’m going to do, or if I’m even being seen on camera. But other than that, I kind of prefer just being the [actor]. Some people are just the opposite – some people are, “What lens are you on? I want to know exactly how to modulate the performance,” and that just makes me self-conscious. I feel like I don’t have the craft to do that [laughs] – I need to be kind of innocent to what’s going on. And then we have real literal requirements that are technical sometimes. “The dolly is doing this, and in two seconds out of the seven that it’s moving is when we actually see you.”

AX: You’re from a big show business family – actors, producers, studio heads. Have you learned anything from your family that’s been useful to you as an actor and/or a director?

GOLDWYN: For me, the biggest thing is that I learned from a very early age that a career in this business is about a body of work, it’s about surviving, and that it’s not about being hot or getting the brass ring. It’s about being in it and building a body of work. Hopefully, you’ll work in the profession, as opposed to you come into it, you have this glitz and glamour and all of the ephemera of show business which, with failure, if you buy into that, you suffer a lot, because then something bad happens and you’re down, and then something good happens, and you think, “Oh my gosh, I’ve arrived! Wait, where’d it go?” [laughs] So that was very helpful.

AX: Is there anything else you would like to say about SCANDAL right now?

GOLDWYN: I guess all I can say is, there have been a few times in my career when you really feel something has magic and this feels that way.

Tags: A Walk on the Moon, ABC, Bellamy Young, From the Earth to the Moon, ghost, interview, Jeff Perry, Kerry Washington, Liza Weil, Neil Armstrong, Samuel Goldwyn, Scandal, Shonda Rhimes, Someone Like You, The Last Kiss, The Sum of Us, Tony Goldwyn