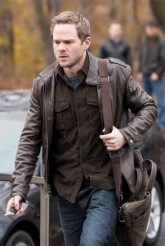 Roderick is revealed, more cop shenanigans and Hardy saves the day yet again 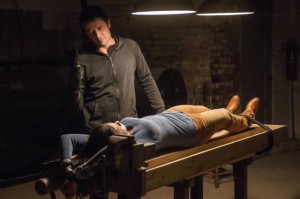 This week’s episode of THE FOLLOWING was space filler while the pieces get set in place for whatever comes next on the show.

Perhaps the biggest bit of information we received in “Welcome Home” was the reveal of Roderick (Warren Kole), a small town sheriff and right hand man to Joe Carroll (James Purefoy). While on the outside Roderick seems like a likeable fellow but we soon learn that not only did he kill a number of women during his serial killer training with Carroll (murders Carroll took the wrap for) but he also has a nasty temper.

Roderick just doesn’t have a handful of people that have joined the cult either, instead he has been “recruiting” and there are at least two dozen people under his and Carroll’s control at their compound that we were introduced to last week and shown more of this week. This at least explains a little regarding how there seemed to be conveniently a member of THE FOLLOWING at every important moment of the show when someone could have been caught or killed. I say a little because in reality this is complete bunk and we must suspend our disbelief.

Of course, this can only take us so far when it comes the bumbling, fumbling, stumbling idiotic police and FBI assigned to this case as I detailed ad nauseam in my review of last week’s episode. Well, the good news is that the profound worthlessness of the law enforcement was toned down a bit this week. The bad news was it was still in effect as not only did we get introduced to yet another top official from the FBI assigned to handle the case but, of course, he’s confrontational with Hardy (Kevin Bacon) and completely moronic to what has already happened so far – putting restrictions on Hardy despite the fact he’s the only person to actually do anything or kill anyone this season.

Now, they talk about how the entire bureau is up in arms over Carroll escaping for a second time yet they send only one dude to handle the situation? Seems a bit light on the backup. You’d think by this time with so many cops and federal agents being killed or maimed they would have every available man and woman locking down every road and town in the immediate area. Instead one dude comes in and he’s more of a hindrance

The other bit of interest came from the abduction of Mike Weston (Shawn Ashmore) at the hands of Roderick and his posse of killers who were again able to get access to an area they probably should have not been able to and easily take him. This, of course, led to once again Hardy saving the day and killing more followers. Seems to be a common theme on this show.

While not as bad as last week, this show still needs a rapid turnaround to live up to its potential.