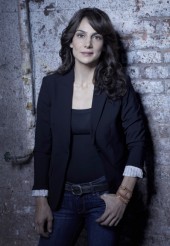 The actress also talks about her favorite horror movie 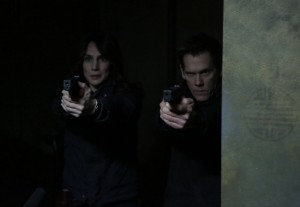 In Fox’s freshman hit THE FOLLOWING, Monday nights at 9 PM, it seems like Annie Parisse’s character, FBI agent and cult specialist Debra Parker, is one of the good guys. But on this serial killer thriller, created by Kevin Williamson, it’s hard to tell. Did Jacob (Nico Tortorella), a devoted follower of charismatic multiple murderer Joe Carroll (James Purefoy) spare Parker in last week’s episode because he needed leverage against series hero Ryan Hardy (Kevin Bacon), or did Parker reveal something to Jacob while we weren’t looking?

Parisse, of course, is hardly likely to share an answer to that question. However, the Anchorage, Alaska-born actress, who previously played a Federal agent in the feature film NATIONAL TREASURE, was a series regular in LAW & ORDER and RUBICON and currently has a recurring role on PERSON OF INTEREST, is happy to talk about other aspects of her work on the ever-twisting FOLLOWING.

ASSIGNMENT X: Did you do any research coming into THE FOLLOWING?

ANNIE PARISSE: Yeah, I did. I spent time with three different FBI agents in New York, which is amazing. They were so incredibly helpful. My only experience, obviously, with the FBI is what I see on TV [laughs], so it was amazing to get to talk to some people who actually live it every day, one of whom was a woman who’s the head of the Violent Crimes Unit in New York and went through two pregnancies on the Violent Crimes Unit, and two children, and it was so amazing to me to talk to her about what it’s like to be a woman working in that kind of a field, that level of violence, and with kids, and obviously a lot of men, was fascinating. She talked a lot about how compartmentalized her life was and what she brought to work and then who she was at home, and that as a woman there, and especially as a woman with children, she felt a real pride in being able to keep it totally professional and keep her family life out of it, and I thought that was an amazing detail about her personal experience. My character is a cult specialist, so I also spent a lot of time watching tons of documentaries and read everything I could get my hands on about cults as well to sort of familiarize myself with what would be Parker’s background.

AX: How far ahead are you told what the plot twists are going to be?

PARISSE: Not far. I mean, I know a few things, like big arc kind of things, but almost none of the details.

AX: Do you feel like you have to play Parker with a little more restraint than normal, in case it turns out that she goes in a direction we’re not expecting?

PARISSE: I feel like when I first read the script, [that’s] one of the things that really attracted me to the character. I feel like that’s actually part of her nature, so I don’t feel compelled to play her with restraint because of where Kevin [Williamson] might take her in terms of, is she a member of the cult, isn’t she a member of the cult, but I feel like, as a human being, she’s somebody who keeps everything under wraps – she’s somebody who doesn’t let any of it show, and it’s one of the things that makes her really interesting. There’s a lot going on under the surface.

AX: Did playing a district attorney on LAW & ORDER help prepare you in any way for THE FOLLOWING? If only because both characters have legal jargon in their dialogue?

PARISSE: Right, I guess so. The emphasis in LAW & ORDER in terms of that kind of dialogue was more procedural and I think it’s here very much more in the moment and like what is happening moment to moment on the case. But other than that, they seem like really different people to me.

AX: And did you have to do any physical training for THE FOLLOWING?

PARISSE: I didn’t do any combat training or anything like that, but using weapons – between this and PERSON OF INTEREST, I have learned more about how to carry a gun, how to fire a gun, what are different types of guns than I ever thought I would know.

AX: Are you going to be able to continue to work on PERSON OF INTEREST?

PARISSE: Yeah. They [THE FOLLOWING and PERSON OF INTEREST] are working together [in terms of scheduling].

AX: Has there been anything on the show that’s grossed you out?

PARISSE: Hmm. You know, I’m a big horror fan, so I’m not very squeamish about stuff, although I will say, I think it was in my first episode, where we’re walking into the sorority and there were one, two, three, four, I think five girls who had been murdered – I mean, walking into that scene the first time, I was like, “Whoa, they’re really going for it.”

AX: Were you familiar with the work of Kevin Williamson or Kevin Bacon or James Purefoy before this?

PARISSE: Yeah, of course. I’m totally a big fan of James from ROME, I thought he was fantastic in that, Kevin Bacon of course I grew up on, he’s amazing, and I am so thrilled to be working with him, and I’m a huge fan of the SCREAM movies, so as a horror fan, those were great.

AX: What are you favorite horror movies?

PARISSE: My number one, my go-to, is the Donald Sutherland remake of INVASION OF THE BODY SNATCHERS. That’s the first movie that I saw as a kid, probably twelve or thirteen when I saw it, that I was so terrified and I’ve got to say, later, in college, I took a class on horror films and that movie was just as scary as an adult as a kid. It stands the test of time. It is amazing.

You know, one of the things that’s amazing about that, and actually, not to tie it all together but I will, I feel like when horror is at its best, and that movie’s a great example of it, it’s scary, but it’s actually about other things. And in that movie, it’s about [Sutherland’s character] and Brooke [Adams’ character] and their relationship and they’re two people who are alone in the world who find each other and then lose each other, and that’s ultimately what the terror of that movie is, and I feel like that’s what’s amazing about what Kevin Williamson is doing – he’s using the horror genre to talk about human relationships and what is really passing between two people.

AX: In THE FOLLOWING, people are so desperate to feel belonging and a sense of purpose that they join the cult …

PARISSE: Absolutely. I thought that was a really interesting question, about how does Joe Carroll use his charm to get people to do these horrendous things, and when I read the scripts, I often think the characters already kind of want to do – there’s some emptiness in them that’s so profound that they feel filled, and that’s the sort of gang thing – they feel [a need] that maybe somebody a little more secure or a little more satisfied in their life or emotionally stable or whatever it is wouldn’t be as susceptible to, but I think it’s something we all have in us. That’s a big question in the show, with THE FOLLOWING, it’s exactly that. It’s like, why do people allow themselves to be pushed, manipulated, coerced? What do we need? And I think it’s probably different for every individual character, the thing that they need. And that’s again what Joe Carroll taps into is a profound intuition of what different people need.

AX: What would you most like people to know about THE FOLLOWING right now?

PARISSE: I think it’s really a character-driven drama more than anything else.