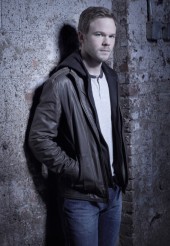 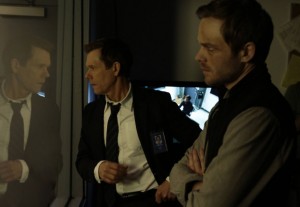 The title of THE FOLLOWING refers to the homicidal acolyte of brilliant serial killer Joe Carroll (James Purefoy), who currently seems to be in dire straits, with his young son Joey (Kyle Catlett) taken away from him by the Feds, who are also close to storming his location.

Former FBI profiler Ryan Hardy (Kevin Bacon) has been brought in to help with capturing Carroll – he did it before, after all. Hardy has his own good kind of follower, FBI Special Agent Mike Weston, played by Shawn Ashmore. Mike admires Ryan, even when he thinks the older lawman is being infuriatingly taciturn, and has taken beatings and even bullets in the line of duty while tracking Carroll.

If it seems like Ashmore is everywhere on television at present, what with that fellow playing Warehouse Agent Steve Jinks on WAREHOUSE 13, that’s Shawn Ashmore’s identical brother Aaron. As Ashmore explains, “I did X-MEN, Aaron did WAREHOUSE 13 and SMALLVILLE [Shawn Ashmore did a guest arc on the latter series as Eric Summers].”

Ashmore, originally from Richmond,British Columbia, takes some time at a party thrown for the Television Critics Association by Fox to talk about chasing evil with Bacon.

ASSIGNMENT X: Is Mike Weston your first eager-beaver character? After all, your character in the X-MEN films is so cool that he’s called Iceman.

SHAWN ASHMORE: This is a slightly new foray. I can say that I was potentially slightly inspired by Aaron’s performance as Jimmy [Olsen on SMALLVILLE], but yeah, this is kind of my first eager-beaver sort of thing.

AX: Would you say Mike looks up to Kevin Bacon’s Ryan as a sort of father figure?

ASHMORE: I don’t think it’s a father figure. I feel like Ryan, to Mike, is almost like a rock star. [Ryan is] the only person that could find Joe Carroll, the most notorious serial killer in recent history. And [Mike has] studied the case, he’s studied Joe, he’s studied Ryan. But it’s ancient history. [At the start of THE FOLLOWING], Ryan is retired, Joe is in jail, so not only is Mike brought into this case, he’s actually next to his hero. So I always thought of it like he’s on stage with his favorite performer – he’s got to step up and do it. So I don’t think that it’s a father figure, I just think that it’s a mentor, potentially, and he just thinks and knows that as much as some people are judging Ryan about the book he wrote about his potential relationship with Claire [Joe Carroll’s ex-wife, played by Natalie Zea] and the drinking, Mike just thinks, he’s the only guy who could do it the first time, he’s probably the only guy who could do it this time.

I think that what you see in the pilot, the immediate puppy dog hero worship, that initial “Wow, I’m next to the guy that I look up to, I want to impress him, I want to be important on this case,” dissipates very quickly. I think it’s less hero worship and more just trying to establish a mutual respect with Ryan. He’s the guy, obviously a very talented agent in the past, and I think if Mike had his way, he would be an agent like Ryan Harding. I think he loves Ryan’s instincts, he loves that he will do what he needs to do to solve the case.

AX: Do you think Mike ever feels like he wants to kick Ryan get him going because Ryan gets so depressed?

AX: What’s the mood like on THE FOLLOWING set?

ASHMORE: Obviously, it’s sensitive material and there are days where it’s very emotional and we have to respect what the actors need to do to get to certain places, but we’re all there to make a show that we really like, so it’s not like when we cut, “Oh, it’s so depressing.” I think it’s exciting to make a show you’re excited about making, and that to me is the tone on set.

AX: What is the pace of production on the set?

ASHMORE: It’s very fast-paced. We have a brief five days down, like you [customarily] do on television. The thing that’s great is that Marcos Siega, the guy that directed the pilot, he’s now an executive producer and he’s directed a couple episodes, established this handheld, fluid style, which doesn’t require a lot of lighting, so they light the set for us, and we can just shoot, shoot, shoot, and we have tons of cameras on the set, and we just fly. We get a lot of takes – more than we would if there were a lot of dolly moves and stuff like that. I like it like that.

AX: Can you say why Mike is so fascinated by the Joe Carroll case at the beginning?

ASHMORE: I think Mike has a sense of justice in him and I think we are titillated by these incredibly evil cases that we can’t understand. I think we all want to know why these people [who commit terrible crimes] do it and I just think it’s literally that thing where he just needs to understand. We think that we can be safe if we can understand where the violence is to protect the ones that we love. In reality, you can’t. I think the show sort of says that, that you just never know sometimes who those people are going to be. That’s terrifying. But I think it’s about protecting society, protecting yourself. You just don’t know. And that’s what’s terrifying. That’s why the show works. That’s why I think people will continue to tune in. Because it’s terrifying. I don’t think it’s meant to scare people just because – I think that it’s a reality and I think on the show, too, we’re also very clear about the good and the bad. Joe Carroll is on one side and we as the FBI agents are trying to put a stop to this. So I think Mike has that sense of justice in him

ASHMORE: I did a film called MARIACHI GRINGO about a year ago that is coming out some time this year. It’s not a musical, but there’s a lot of music in it. It’s about a guy from Kansas who is thirty – he sort of hits a wall, falls in love with mariachi music and meets a mentor who teaches him and goes down to Guadalajara and falls in love with the country and the people and a woman. It’s a really nice film. It’s a very family-friendly film with a lot of heart. So I’m really proud of that movie.

AX: What else would you like people to know about THE FOLLOWING?

ASHMORE: I think that for me, the most interesting thing is the thriller aspect and the dramatic aspects of this show, the character development, the tension. I love all those things about this show. This is a page-turner when an actor as I’m reading it, and I think that as audiences start to watch the show, you’re going to want to know. Once the roller-coaster starts, you don’t want to get off, and I think that’s a huge part of the appeal and what I love about the show. I think it’s important for people to know what an amazing thrill ride this show is, and how character-driven this is. Of course violence is there, but this show is about the characters. This show works and it’s important and it’s fun because you care about the characters. So I think it’s a great thrill ride and I think people are going to really like what they see.

AX: How do you rate THE FOLLOWING?

ASHMORE: Two thumbs up. Three thumbs if I had a third one.