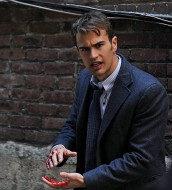 The actor also talks playing a psychic, a vampire and appearing at Comic-Con 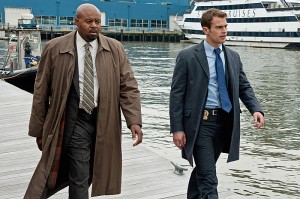 In GOLDEN BOY, which has its finale on CBS tonight, Theo James’ character Walter Clark has become the youngest-ever commissioner of the NYPD. The story flashes back to seven years earlier, when an act of heroism on Walter’s part vaults into the ranks of the city’s homicide detectives. There Walter meets mentor and partner Det. Don Owen (Chi McBride) and idol/rival Det. Christian Arroyo.

Despite playing a New Yorker through and through, James is actually from Oxford, England. He appeared in one pivotal episode of DOWNTON ABBEY as Mr. Pamut, who died in Lady Mary’s bed. Two years ago, James played the lead in the BBC’s miniseries BEDLAM, which aired here on BBC America, where his psychic character Jed Harper saw terrible things in a haunted mental hospital-turned-condominium. James also played the vampire David in the feature film UNDERWORLD: AWAKENING. Other credits include Woody Allen’s YOU WILL MEET A TALL DARK STRANGER and the upcoming science-fiction feature DIVERGENT. At a press event, James talks about GOLDEN BOY and his recent eclectic collection of characters.

ASSIGNMENT X: What’s scarier, the shades on BEDLAM or the human criminals on GOLDEN BOY?

THEO JAMES: Oh, definitely the shades – well, human nature is scary in terms of what it can do. I think both, in a way. A ghost is something you can explain; something you can’t control can be pretty dangerous. But then at the same time, power and politics and someone screwing you over and jailing you for fifteen years when you didn’t do anything wrong, that’s also extremely scary.

AX: Is this also your first police officer character?

AX: How is it putting those two things together as firsts? Is it helpful that you’re playing an American cop, as opposed to a British police officer, or an American who has a more mundane job?

JAMES: Yeah, I think it helps. With cops, there’s such a specific swagger and movement to how they are as people that it kind of helps – especially inNew York, it’s very specific – there’s so much character you can draw on, I think it makes it easier. If I was playing an L.A. guy who went to Beverly Hills High School or something, I think that would have been much harder for me, but because there’s so much richness from a New York cop, then it’s easier, because you’re drawing on so many different levels.

AX: Was there anything you had to research or learn to do for the character?

AX: In BEDLAM, Jed Harper didn’t have a complicated professional history, but he was extremely unhappy. Was it difficult playing somebody who is relatively depressed for a good portion of the running time?

JAMES: I kind of liked that in a way, because I liked his complexity and to make a firm basis in where you come from and where he’d come from. I really wanted to plot his course as a person and his mental state. Someone who’s been diagnosed early with schizophrenia when he doesn’t really have it, he’s been plied with drugs and had all this stuff happen to him I think makes for quite a complex person and so he probably wouldn’t be cracking jokes. And also the fact that he sees these visions. Me and the director had a discussion about it and we wanted to make sure they were physically painful, visually arresting and had a real effect on people. So as a result, I think he would be a fairly dark person. 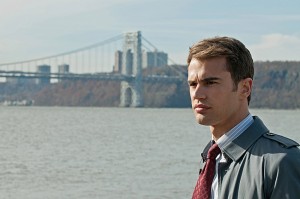 AX: BEDLAM had a lot of on-set practical effects that looked like you had to stay still while they were being rigged. Can you keep your concentration the normal way you do between Take One and Take Two, or was that something a little different?

JAMES: Sometimes you have to really work hard to keep yourself in the zone, especially when you’re waiting for forty minutes or longer, two hours between takes or a set-up or if something’s going wrong, but that’s all part of the job. I think you just have to be mentally really on it all the time.

AX: And when you were physically grappling with the ghosts, did you and the actor playing the ghost have discussions about, “I’m going to put my hand here, and you’re going to put your hand there,” or did you just say, “Okay, you’re a ghost, surprise me”?

JAMES: No, you kind of have to block it to an extent. But it depends really what you’re doing. Some of it is a bit more organic, which is good, but at the same time, you need to know what you’re doing to make it as fluid as possible, because of the medium.

JAMES: Yeah, I think there’s an animal, a Caliban in them [vampires].

AX: Did you have to practice talking with the vampire teeth in your mouth?

JAMES: Definitely, you need to do that, otherwise you’ll be lisping.

AX: You went to Comic-Con for the UNDERWORLD: AWAKENING and BEDLAM presentations. Had you ever done anything like Comic-Con before?

JAMES: No, I hadn’t [laughs], and it was quite crazy. The BEDLAM stuff was really fun, but it was quite an experience. The good thing about Comic-Con is everyone’s so up for it and keen that you get a really positive vibe from the audience.

AX: When you first started out as an actor, did you think, “If I become really successful, I will get this sort of reaction,” or was Comic-Con sort of beyond what you’d envisioned?

JAMES: Ah, yeah, well [laughs] – to be honest, I’m a kind of new commodity, so it wasn’t like people were screaming their heads off. But it was just nice to have good questions and positive feedback.

AX: And how are you enjoying the experience of working in North America?

WHAT DO YOU THINK OF GOLDEN BOY? COMMENT BELOW