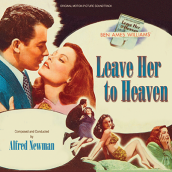 Kritzerland has become the most passionate soundtrack label when it comes to releasing soundtracks from Hollywood’s golden age – the kind of symphonically lush studio system scoring arguably best personified by Alfred Newman. While their magnificent re-mastering of Newman’s HOW GREEN WAS MY VALLEY will play to more sentimental tastes, fans who appreciate Newman’s less-utilized, if just as formidable talent for film noir will get their Technicolor kicks out of 1947s LEAVE HER TO HEAVEN, in which Gene Tierney, the object of a detective’s obsession in LAURA (whose iconic David Raksin score was just an instant Kritzerland sell-out) gets to turn the tables by playing a proto-Glenn Close whose nearly incestuous fatal attraction snares Cornel Wilde.

Newman’s towering, pounding theme is all about wantonness, its sweet side quickly giving way to ominous suspense that won’t be denied. A master of all genres, Newman’s approach here is anything but saintly, (if not quite as brooding as his peer Bernard Herrmann), tumultuously spelling out the kind of unkempt sexual desire the production code wasn’t about to show you- even if a chorally moralistic happy ending might be in store for the big fade-out.

While LEAVE‘s lust might not have engendered a jazzy approach in its powerhouse twelve minutes, this album’s accompanying Newman score for 1951s TAKE CARE OF MY LITTLE GIRL has nostalgic swing tunes to spare, along with a generally affectionate, bell-ringing symphonic tone for a young woman who discovers that her new life in a bucolic college can also be a hornet’s nest of WASP sorority nastiness. As always, Newman comes up with a memorable theme, here the sweet, string-driven sound of a girl’s unshakeable moxie in the face of cattiness. This is a GIRL that not only resonates with a good heart, but whose poignant violins and uplifting orchestrations could easily serve as the instrumental score for some MGM musical, which is exactly the kind of touching, unabashedly melodic quality that makes the golden age such a worthwhile place for Kritzerland to keep on mining.