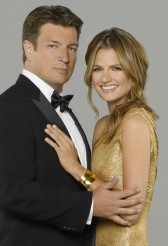 No shock - Beckett said yes. Shock - it's a two-parter. Argh. 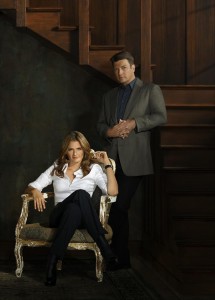 So we were left hanging at the end of last season, with Castle (Nathan Fillion) down on one knee, proposing marriage. Fade in on “Valkyrie” with Beckett (Stana Katic) thrilled that he proposed. It’s CASTLE, of course it’s not clear cut. Turns out she was afraid he was trying to break up. But here’s where it gets good. Instead of being a jerk about her new job and insisting that Beckett stay in New York, Castle suggests they find a way to figure it out.

So we jump ahead two months and Beckett isn’t exactly a star yet on the new team. Worse yet, her planned visit home isn’t going to happen. There’s a big classified case on deck and Beckett has to work. Castle, for his part, arrives home from his latest book tour (with far too much energy for someone coming home from a book tour) to find that Alexis has brought her new boyfriend Pi (Miko Olivier) home to stay. Pi is a classic New Age ne’er-do-well and even Martha (Susan Sullivan) is stumped. So she leaves her poor son Castle on his own to deal with it. Which means Castle is in no mood when Beckett calls him about having to stay in DC.

Now, keep in mind – at no point do we have any idea that this is going to be a two-parter. For cripes’ sake, it’s a season premiere! You save two-parters for ratings sweeps months and near the end of the season. You don’t start with one.

In any case, if Beckett can’t go home to New York, Castle decides to show in DC. Problem is, his usual kibbitzing on Beckett’s cases? Not going to happen here. It’s classified. Oh, right. Like that’s going to keep Castle out of it. Fortunately for him, Beckett’s file falls and drops an important piece of evidence on the floor.

What’s happened is that this high-security encryption card has been stolen from a super high-tech building during a blackout. The blackout didn’t last quite long enough for the bad guys to leave the building, but no one has shown up on the security monitors. Ah, but there is one route – the drain system, which wasn’t as well secured as they thought.

In the meantime, Castle in checking in with our friends back home, Detective Ryan (Seamus Deaver) and Esposito (Jon Huertas), and after making the requisite ruggedly handsome joke (which Fillion certainly is), gets them to point him in the right direction, supposedly as research for his next book. Uh-huh. In any case, Castle arrives on the scene at the golf course at the same time and Beckett and her new partner Rachel McCord (Lisa Edelstein).

In any case, they do get some surveillance pictures of a suspect, facial recognition software pegs him as Bronson (Jack Kennedy), a former Marine with Black Ops experience – just the kind of bad guy they’re looking for. Sure enough, there’s a backpack in his apartment with the right kind of tools, but no Bronson.

Nope – he’s busy abducting Castle in a desperate attempt to find out what’s going on about “Valkyrie.” But naturally, Bronson dies as Castle tries to tell him he doesn’t know anything. Beckett’s new boss, Vallente (Yancey Arias) arrests Castle, but more to make a point about not sticking his nose into Beckett’s cases. Something else Beckett and Castle have to figure out in their new relationship.

So Castle heads back to his apartment where Pi is making papaya steaks for dinner and a real mess. Awww, Pi is trying to make it up to Castle by offering to talk it out. No way. Castle goes to visit Ryan and Esposito, and Espo recognizes Valkyrie as part of a super-secret project called DreamWorld.

In the meantime, Beckett and McCord are on the hunt for Bronson’s girlfriend and run her to earth at DC’s Union Station (and it looks like they actually shot it there, instead of in L.A.). They find the stolen card in the locker that the girlfriend unlocks, but it becomes apparent that not only does she not know Bronson is dead, he was set up. So the card’s theft was a diversion – what were they really after?

Well, we find out after the Feds yank Castle out of his apartment. It’s back to the questioning room, although this time it’s Beckett come to tell Castle the really bad news. The real target of the theft was a chemical agent that Castle was exposed to in Bronson’s car. And he has only day to live. To Be Continued.

Yes, that was me you heard yelling. The poison bit? Puh-leeze! Nobody can predict with that kind of accuracy when a poison will take effect. I’ll go with it. At least they’re not talking about any real toxin. But a two-parter? Come on. That was just cold.