Walt and Jesse must face the consequences of their past bad choices, and the results, especially for Jesse, are horrifying 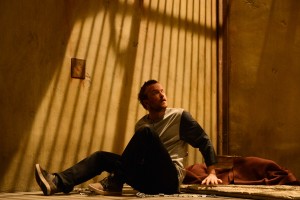 Earlier in BREAKING BAD, at yet another juncture when Walt (Bryan Cranston) felt compelled to pull out all the stops to keep Jesse (Aaron Paul) from quitting their meth business because of his troubled conscience, Walt made the point that if there was a hell, they were pretty much both going there anyway, so what difference does a little more meth-cooking make?  In “Granite State,” BREAKING BAD’s penultimate episode, they both find themselves in hell a little early, and it’s pretty hard to watch.

“Granite State” begins with the introduction of veteran tough-guy actor Robert Forster, (credited as “Vacuum Cleaner Guy”), who is the mystery minivan driver who Saul Goodman (Bob Odenkirk) uses to spirit away his more desperate clients into new identities.  In an important bit of exposition at the beginning, we find out that Vacuum Cleaner Guy (VCG) is in the process of spiriting away both Walt and Saul, but the heat on them is too much for them to be moved now, so they get to share time and space in the basement of his vacuum cleaner repair shop.  Walt then explains to Saul how he wants violent against Jack (Michael Bowen) and Todd (Jesse Plemmons) and the rest of the Neo-Nazis who’ve taken his money and killed his brother-in-law Hank (Dean Norris), and he wants Saul to help him hire some hit men.  Saul’s view of the situation is sobering, however, and (in a moment that’s more pragmatism than decency) suggests that Walt abandon this plan, turn himself into the DEA, and get his wife and children off the hook by taking the fall for his crime empire all by himself, knowing he’ll spend his final months before the cancer claims him as a Dillinger-figure in jail rather than on the run and anonymous.  Otherwise, Skyler (Anna Gunn) and their kids are going to be under the thumb of the Feds for the next year and a half, unable to clear their name and unable to support themselves.  Saul helps lay out the three choices for Walt:  Stay and turn himself in, fight the Nazis, or run away.  As we should have expected from Walt by now, he chooses the worst possible option.

Failure to accept choice number one is to be expected, because we know deep down Walt has a misguided belief that his actions were justified and he doesn’t deserve prison.  Choice number two is also a bad choice, but the unfortunate consequence of Walt not choosing it means no help is coming for Jesse.  And, as well soon learn, Jesse’s hell winds up being a lot worse than Walt’s.  Imprisoned by the Nazis in an underground cell all night, forced to cook meth for them all day, with no relief from this for a month, Jesse formulates an escape plan, and it fails, with horrible results.  In a heart-breaking scene, the Nazis make good on their threat to kill Jesse’s ex-girlfriend, (Emily Rios), while he watches, bound and gagged, from across the street.  They remind him that they can still kill her young son, Brock (Ian Posado), if he tries to escape again.

And these Nazis are actually some of the most awful villains in TV history.  Each one is a ruthless psychopath, who gets worse with every word out of their mouth.  Under the direction of Lydia (Laura Fraser), who was seen by Skyler at the car wash earlier in the season, and who was identified to Skyler as one of her husband’s business associates, the Nazis, (with Todd doing the bulk of the talking), go to the White house and threaten Skyler with harm to her children, including her toddler Holly, if she mentions Lydia to the feds.  Obviously Skyler says she’s going to keep quiet, but, in a meeting between Todd and Lydia after the fact at a diner, we get the strong sense that this assurance is not going to be enough for Lydia.

Lydia’s pretty awful, too. While Lydia’s pathology superficially resembles Walt’s, (a mother and a white-collar professional who seems meek and out-of-place among “real” violent criminals), the specific demon that seems to plague her is uncertainty, and this uncertainty drives her to horrible acts.  She can’t handle the idea that there’s even a chance that Skyler may one day rat her out, any more than she could handle the idea that Mike’s guys in prison could be allowed to live, lest one decide to testify against them.  When Todd tells her that the last batch of meth (cooked by Jesse) approached 92% pure, (which is actually a twisted romantic overture on his part to get her to stay in business with him, despite her anxieties), she just mutters “92%”, as though the proximity of this number to 100% is secretly what she finds soothing about it.

Meanwhile, Walt discovers what waits for him while on the run:  A sterile, anonymous month spent in a remote cabin in New Hampshire.  No human contact, no phone, no internet, and only MR. MAGORIUM’S WONDER EMPORIUM to watch on DVD (two copies).  When the VCG returns to Walt’s cabin/hideout after a month’s absence with news from Albuquerque, Walt isn’t happy with what he finds out.  The bank has seized Walt’s house and placed a fence around it, and the neighborhood kids break in and ritually vandalize it. Skyler is getting by doing “part-time taxi dispatch” for money.   Walt then makes the choice to try and contact his son and get some of his money to them, (which both Saul and the VCG told him would be the thing that got him caught).  From a payphone at a bar in New Hampshire, Walt gets a woman to impersonate Marie (Betsy Brandt) and calls Walt Jr. (RJ Mitte) at school.  Apparently even the school administration refers to Walt Jr. as “Flynn White” now, probably out of consideration for what he’s been through.  When Walt has his son on the line, he explains his plan to send money to Walt Jr.’s friend’s house, and tries to lay out his case that all of his past misdeeds were done for the benefit of their family.  In the emotional climax of the episode, Walt Jr. explodes and unloads all his righteous anger at his father, telling him he killed Uncle Hank, and that he wants him to die.  He doesn’t want any blood money from his dad.

With Walt’s (always implausible) rationalization that he did everything for his kids now in tatters, he seems finally defeated.  Walt calls the DEA office in Albuquerque and identifies himself as Walter White, knowing that law enforcement will be at the bar momentarily to arrest him, giving him time for one last drink.  But before he is able to submit fully to whatever better angels of his nature may still exist, he sees something on the bar’s TV set that brings out the Walt we’ve all come to know and cringe about.  Elliot and Gretchen Schwartz (Adam Godley and Jessica Hecht), Walt’s former college friends and business partners, are interviewed by Charlie Rose (as himself!) about their company, Grey Matter, and its ties to now-notorious crime lord and founding partner Walter White.  Elliot and Gretchen make it clear that Walt had nothing to do with their company or its success.  All he came up with, they say, is the company name.  Walt seethes.  And when the sheriff’s department pulls up in front of the bar, he’s gone.

This struck me as an incredibly clever stroke by BREAKING BAD’s creators.  Having stripped every other rationalization away from Walt, they found a way to show us that what’s left underneath isn’t so much a person as it is a massive bruised ego, lusting for validation it can never have.  Being snubbed professionally by the Schwartz’s was probably the moment the seeds of Heisenberg were planted; so making this the turning point of the episode was a wake-up call to any audience members who were expecting Walt’s final act to involve any kind of heroism or redemption.  In fact, what this probably means is that Walt’s return to his house to collect the hidden ricin from the flash-forward sequence that began this season probably means the poison is intended for the Schwartz’s.  And maybe that really means nobody’s coming to help Jesse?

The bleakness of “Granite State” was relentless, although not so much that it tops last week’s episode, “Ozymandius,” which was one of the most gut-wrenching, and all-around finest, episodes of television I’ve ever seen.  That said, with all its secrets revealed and no masks left for anyone to hide behind, all that’s left for BREAKING BAD to do now is show the guilty being punished.  And every character remaining on this show, (with the exception of Marie, Walt Jr. and toddler Holly), is in some way guilty.  And “Granite State” proves that this show will not pull punches when it comes to dispensing brutal karmic payback.  While it’s not clear whether these characters actually deserve a break, I think it may be rough to spend another 75 minutes sharing their private hells with them, if that’s what Sunday’s finale has in store.  I’m looking forward to it.  And then, in some ways, I’m really not.