Walt takes drastic action to get Hank to back off, and Jesse struggles with a major decision about his future, and makes a shocking revelation. 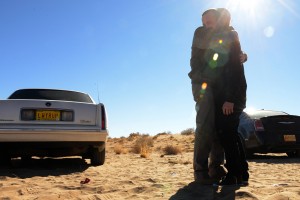 As BREAKING BAD marches towards it’s conclusion, we’re seeing all the secrets its characters were hiding from one another come to light at an ever-quickening pace.  In one way, it’s very satisfying.  Great writing and the talents of these great actors have made their characters’ reactions to the horrible truths they’re learning incredibly memorable.  And yet, in “Confessions” there’s still something that feels obligatory about getting all these reveals out of the way in the allotted time remaining, and this focus on wrapping up lose ends slows down the episode in some spots.

“Confessions” begins by establishing a new potential threat to Walt.  We spend several minutes with Todd and his Uncle’s prison friends at a diner, on the verge of their return trip to Albuquerque to fill the large void in the meth cooking business left by Walt’s retirement.  But besides seeing their swastika tattoos and watching one of them wipe blood off his boot, we don’t get to see very much of these guys, and after the credit sequence we’re right back where we left off last week, with Hank entering the Albuquerque PD’s interrogation room to try and get Jesse to testify against Walt.

Anyone who thought Jesse’s hollow demeanor last meant that Hank would at least have a shot at getting Jesse onto his team was instantly disappointed, though, as Jesse listens to Hank’s spiel and then retorts “Eat me.”  That’s the first bad news Hank’s gotten tonight.  It won’t be the last.

Meanwhile, now that Walt knows that Jesse has completely lost his cool, it looks like he’s realizing that the status quo with regards to Jesse isn’t going to work anymore.  Worse for Walt, Hank and Marie are putting on a full-court press to try and get Walt to crack and surrender to the authorities.  Walt learns that Marie has asked Walt Jr. over to help her with “some computer thing” and Walt knows that’s not why she really wants to talk to him.  Walt Jr. is the only character in BREAKING BAD who still doesn’t know Walt is Heisenberg, and Walt and Skyler intend to keep it that way.  Walt diverts his son by using this moment to tell him that his lung cancer has returned, and Walt Jr. is so devastated by this awful news that he can’t think of leaving his father’s side right now.  Not that this show gives you many opportunities to forget this, but Walt is a horrible, horrible man.

This leads to the episode’s most memorable scene.  Walt and Skyler, in what looks like a desperate attempt at damage control, wait for Hank and Marie to join them at a table in the middle of a noisy corporate Mexican restaurant.  When Hank and Marie arrive they’re stunned that Walt and Skyler have the audacity to ask them to leave their kids “out of this.”  The fact that a goofy teenaged waiter keeps coming to their table and breaking the tension by offering to get them started with some homemade guacamole just makes this scene a perfect encapsulation of everything tense and silly that BREAKING BAD does so well.  Obviously Hank and Marie aren’t going for the “leave our kids out of it” pitch, however, and Marie goes so far as to request that Walt kill himself as the best solution to everyone’s problems.  Hank angrily reminds Walt that he’s not going to be able to negotiate his way out of the predicament he’s put himself in, and that there’s no way he’s backing down from his investigation.

Clearly Walt anticipated this and he hands Hank a DVD as they leave the restaurant.  When Hank and Marie play it they discover it’s the second piece of bad news they’re getting this episode.  It’s a video of Walt narrating his “confession” to law enforcement.  In it, Walt gives an alternative history of BREAKING BAD wherein Walt’s brother-in-law Hank, the crooked DEA agent, has been calling the shots for every moment of Walt’s criminal career.  In this version, Hank used Walt for his chemistry skills and used his own vast experience of the meth trade to plot Heisenberg’s ascendancy through the criminal underworld.  It’s scary because to an outsider it would be a much more plausible scenario than Walt committing all of his crimes alone, and Hank knows it.  And, in one more of the episode’s many reveals, Hank finds out that Marie actually got the funds to pay Hank’s extensive medical bills for his rehabilitation from Walt’s drug business, which ties him to Walt in a way that will make Walt’s “confession” sound even more believable.  At least for now, Hank’s beaten.

As the “confession” played on Hank and Marie’s living room TV, all I could think of was “Wow, Walt’s really hit a new low.”  Then I remembered that Walt has done stuff arguably way worse than this already, and it made me appreciate BREAKING BAD that much more.  Even as the series nears the finish line, Walt’s behavior still has the capacity to shock.  And Skyler going along with a plan like this is plenty shocking as well.  Clearly she’s less comfortable with it in the aftermath than Walt is, however.

But while Walt appears to have won the battle with Hank and Marie, he has even more manipulating to do this episode.  He’s still got to deal with Jesse.  After Saul takes Jesse out into the desert for a meeting with Walt, we see a version of a scene we’ve already seen many times on BREAKING BAD:  Walt as father-figure with a not-particularly well-hidden-agenda explaining to Jesse that he should not feel bad about the things they’ve done together.  But this time Walt wants to offer Jesse a different strategy to deal with his guilt:  a new start.  Saul will contact his mystery man who arranges new identities for people and he will then whisk Jesse away, and out of Walt’s life for good.  Jesse’s reaction to Walt’s smoke-blowing is impressive.  He reveals to Walt that he’s finally onto his manipulations, and blurts out what the audience is thinking – they’re meeting out in the desert so Walt can kill him if he doesn’t play ball, the same way he killed Mike.  Walt doesn’t let Jesse’s outburst stop the manipulation, though.  In a huge power move, Walt wordlessly embraces Jesse.  Jesse melts and stops resisting him.  Even armed with the truth, Jesse is no match for Walt’s “Concerned Dad” act, because subconsciously his need for someone to play that role in his life is greater than his need for anything else.  Now Jesse’s beaten, too.

The rest of “Confessions” wasn’t quite as effective for me because it rapidly undoes this stunning moment by staging yet another revelation, this one a lot clunkier than the others.  It also hurts that the remainder of the episode is plot-driven, rather than character driven, and it focuses on a plot-point I’ve never found particularly convincing.  Once back in Saul’s office, after Jesse lights up a joint, Saul makes it clear to Jesse “his guy” won’t take Jesse and give him the new identity if he smokes weed on the trip to wherever they’re going.  While leaving the office for his rendezvous with the new identity guy, Jesse happens to bump into Saul’s corpulent goon Huell in the doorway.  While Jesse waits by himself for the pick-up at the side of the highway, (conveniently, the new identity guy is so secretive that Jesse will have to be alone and unmonitored for him to proceed), he suddenly can’t find his stash in his jacket pocket.  From this Jesse concludes many other convenient things.  1. Huell must have taken his weed.  2.  Huell is therefore an accomplished pickpocket.  3.  Huell must have taken the ricin cigarette out of his pack months before, which led to the intense fear that he’d accidentally poisoned his girlfriend’s son Brock.  4.  Huell must have done this on orders from Saul, who must have been acting on orders from Walt, who arranged all this to tweak Jesse’s mental state so that he would then bury the hatchet with Walt and help him kill Gus Fring.

All of this actually happened on the show, but it was far from BREAKING BAD’s high water mark as far as plot plausibility went, and I was never totally on board with this as one of Walt’s evil schemes.  It starts with requiring a minor character to have a ridiculously convenient and previously unused trait, and then requires a bunch of other dominoes to fall exactly as Walt needs them to.  Having Jesse suss this all out in one moment seems a little too good to be true also.  And while at some point it was going to be important for Jesse to truly grasp the wickedness of Walt’s manipulation of him, this moment is so wrapped up in a complicated understanding of BREAKING BAD’s past history that Jesse has to go back to Saul’s office, beat the crap out of Saul while explaining it all again for the audience, which shows how they didn’t quite have enough confidence that viewers would get it without Jesse recapping it for them.

The episode wraps with Walt at the car wash, having heard what just happened at Saul’s office, retrieving a handgun that’s hidden in the soda machine, and Jesse going to Walt’s (empty?) home with a can of gasoline and dousing everything inside.  This looks like a pretty big tip off as to how Walt’s home came to be burned out and abandoned in the flash forward sequence from two episodes back, and is a great way to cap off the episode.  BREAKING BAD has done a fine job of ending each episode in the second half of its fifth Season with a shocking cliffhanger, and this one is as high a note to end on as the previous two were.  I just wish that “Confessions” had been a little more skillful in laying out the steps that got us there.  But I still can’t wait to see what happens next week.