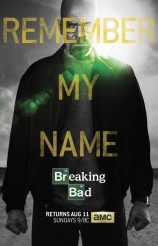 Walt’s world finally starts to crumble, with the return of his cancer, and the possible collapse of his cover story, as Hank finally finds out the identity of “Heisenberg.” But Walt’s not going down without a fight.

BREAKING BAD set the bar incredibly high for itself with the first part of its final season, which culminated last September and left everyone wanting more.  Given that those eight episodes built up to one of the most gripping and fascinating crescendos in TV history, it would have been a great shock if “Blood Money” the premier episode of its fifth season’s second half, could live up to what had come before it.  And “Blood Money” doesn’t quite clear that bar, actually; but it’s early yet, and the final ten minutes of this episode are mesmerizing enough that they make a strong case that BREAKING BAD will not be losing a step, and its story will not be coming unraveled in the end.

As most BREAKING BAD season premieres do, “Blood Money” begins with a visual non sequitur.  This time it’s skateboarders doing tricks in an empty swimming pool.  The zoom out reveals that it’s Walt’s pool, and that his house is otherwise uninhabited and badly damaged.  When scraggly, bearded Walt arrives on the scene, we realize we’re continuing the flash-forward that began season five, with Walt having just coming from breakfast at a diner on his fifty-second birthday.  Whatever happened at his house in the interim must have been transformative in a variety of ways, because the word “Heisenberg” has been spray-painted on the wall, and Walt’s neighbor is terrified to see him again.  In all likelihood, the neighborhood has since learned some hard truths about what Walter White’s been up to.  And, worse, Walt’s back to get the deadly ricin he left hidden inside one of his light sockets.

Suddenly, we’re back in the “present” again, picking off exactly where we left of last episode, with Hank coming from the bathroom, having discovered Walt’s copy of “Leaves of Grass,” and realizing this makes Walt the “W.W.” who was connected to slain meth chemist Gale Boetticher.  Hank, stunned, takes Marie and leaves the Whites’ house party as soon as he can, and promptly has a panic attack and crashes into a fence on the drive home.

Meanwhile, Lydia comes to visit Walt at the carwash/money-laundering operation he manages with Skyler.  We learn that Lydia’s been bequeathed Walt’s drug empire now that he’s out of the business, but that the chemists who’ve replaced him can’t make a product that’s as pure as the methamphetamine Walt was making.  She wants him to come back to work, but he coldly rebuffs her.  When Skyler becomes concerned about the strange woman who’s been hovering over her husband, Walt has to tell her she’s a former business associate, which causes Skyler to tell Lydia in no uncertain terms that she’s not welcome at their place of business.  This seems like a terrible idea, but the scene is intriguing because we’re either seeing Skyler lash out at Walt’s fellow drug dealer as a means to vent the rage that’s been building up inside her for the past year, or we’re seeing her desperately protecting her one real chance to get out of their life of crime. Either way, we can understand where she’s coming from, but we’re not sure she should have this kind of bravado in this situation.  Lydia’s such a strange character, and she seems to shrink from confrontations so thoroughly that we’re not sure how much Walt and Skyler should actually fear her.  While her last attempt at using violence to get what she wanted seemed to work out pretty poorly, that might have been because she was going up against Mike, who had a pretty good idea who she was and how to handle her.  Who knows how the same tactics would work against the Whites?

And while we don’t completely know what’s going on inside Skyler these days, it’s pretty clear what’s happening with Jesse, who’s essentially melting down with guilt, to the point where he’s decided he can’t function unless he gives away the two million dollars of the titular “blood money” Walt gave him.  Jesse gives the money to Saul and gives him instructions to give split it between Mike’s granddaughter and the family of Drew Sharpe, the boy who Walt’s gang murdered because he witnessed their recent drug heist, and whose body will never be found.  As soon as Jesse’s out the door, Saul calls Walt to alert him to Jesse’s actions and his mental state.  And this is where we learn, in BREAKING BAD’s typically understated and suddenly shocking way, that Walt’s back on chemo.  He’s taking Saul’s call from a clinic, where he’s hooked up to an IV.

At this point, further examination of this major plot development takes a back seat as Walt shifts back fully into “Heisenberg” mode, and starts to shore up loose ends in his life.  He visits Jesse, who’s near catatonic with self-hatred, and has to try again to convince him that they can’t “dwell on the past,” and that the only thing they can do is live “ordinary, decent lives” from now on.  This is not Jesse’s first rodeo, however.  I’ve actually lost count of the number of times Walt has had to talk Jesse down from the ledge because his conscience won’t let him carry the things that they’ve done together, although this is the first time where it doesn’t seem like Jesse is even trying to believe Walt’s lies anymore.  Jesse’s pieced together the correct reason why Mike must be dead and why Walt must have killed him, and his response to Walt’s claim that he left Mike alive is so laconic as to suggest that he doesn’t even have the energy to pretend, and he’s just doing and saying to the bare minimum to get Walt to leave the room.  Which Walt finally does, apparently satisfied that his secrets are safe.

Back at home; Walt throws up in his toilet, confirming that what we saw earlier was, in fact, chemotherapy.  In the process he also notices that the copy of Leaves of Grass that was above the toilet is gone, however, and his paranoia kicks in.  He searches the house for the incriminating book and comes up empty.  Then he checks his car and finds a tracking device underneath the fender.  After Skyler tells him that Hank’s been home from work all week with what was supposed to be a simple stomach bug, Walt puts the pieces together, and realizes he’s in trouble.

This leads to the best part of “Blood Money” – the showdown between Hank and Walt that everyone’s been waiting for.  So far, I thoroughly support the decision by BREAKING BAD’s creators to not draw things out and spend only one episode having Walt be blissfully unaware of Hank’s investigation, if only because it lead to this great final scene that rivals anything the show presented in the first half of season five.  Walt comes to visit Hank in his garage, where he’s set up a one-man mobile command center for his newly energized Heisenberg investigation.  After some awkward small talk, Hank’s tension breaking closing of the automatic garage door is a perfectly timed catharsis.  And Hank punching Walt in the face and yelling, “All along it was you!” does the trick as well.  Walt reveals to Hank, (and to us) that he’ll be dead in six months from the cancer, and so Hank’s investigation is likely to be pointless, from Walt’s perspective.  Walt wants to be left alone to die and to keep his family’s reputation intact.  Hank, stunned, speaks for all of us when he utters the phrase “I don’t know who you are.”  And Walt (Heisenberg) gets the episode’s climactic line, telling Hank “If that’s true, and you don’t know who I am, then maybe you’d better tread lightly”, (which is a line so good that it would have been a crime to do anything other than cut to the closing credits as soon as it left Walt’s lips).

I can’t think of anything more BREAKING BAD could have done in “Blood Money” to get its audience excited for its upcoming final episodes.  In fact, my only major complaint about “Blood Money” (and it is oddly major) is that the episode was titled “Blood Money.” I can’t remember BREAKING BAD ever having had an episode name that was so obvious and literal.  Jesse even has to say the words “blood money” to describe actual money that people were actually killed to obtain.  It’s a strange departure from the clever, oblique titles the show normally goes with, and the strangeness of this proved so distracting that I had to wonder whether it was somehow intentional?

But mostly, like most other viewers, I keep speculating as to what kind of ending BREAKING BAD has in store for Walt?  It occurred to me earlier that I’d be satisfied with an ending where something awful happens to Walt, (since he obviously deserves it), but at the same time I wouldn’t be, because that feels too obvious. I’d also be okay with an ending where Walt survives but bad things happen to those closest to him, (because he deserves that too), but that all permutations of this type of ending (Skyler dies, Jesse dies, Walt kills Skyler, etc…) will probably have been predicted by any number of vocal fans on the internet as we get closer to the finale, and their leftover shock value might be limited as a result.  And so I wonder if it’s possible BREAKING BAD might do a head fake and give its fans a SOPRANOS-style vague ending whose meaning we will be forced to spend eternity debating?  This hasn’t been the show’s style in the past, as every random image they’ve introduced, whether it was the stuffed animal floating in the pool or the kid catching a spider in a jar, have ultimately been explained in a clear, unambiguous way.  But I wonder if the challenge of giving us an ending for Walt that no one’s imagined yet might be one they don’t have a better way to meet?

But whatever happens, if the season’s final episodes all pack the punch of “Blood Money,” I won’t be complaining, no matter what happens to Walt.