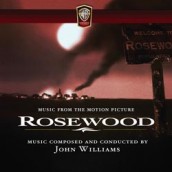 Beyond exploring other galaxies and ravishingly exotic lands, the urbane composer John Williams has found a rich, melodic vein to mine in the south from THE REIVERS‘ coming of age to CONRACK‘s rural school and the comedy-drama car chase that marked Williams’ first collaboration with Steven Spielberg on THE SUGARLAND EXPRESS. But this Queens’ native’s way of knowing how to wield a guitar, jaw harp and harmonica like a regular good old boy would also show the region at its ugliest in a Florida town called ROSEWOOD, whose white population expelled its black populace during one murderous night. While John Singleton’s 1997 film unearths this shocking example of American inhumanity, and selflessness (albeit in pulpy fashion), the multiplex wasn’t quite ready to face their country at its darkest, which has meant that one of Williams’ best, unheralded scores pretty much stayed in relative anonymity with the picture. But it certainly now won’t be the case now as ROSEWOOD‘s complete score gets resoundingly heard with all of its devastating power via La La Land’s two-CD set.

The late 90s saw some of Williams’ most dramatically effective, if bleak scores with AMISTAD, SAVING PRIVATE RYAN and ANGELA’S ASHES. So when ROSEWOOD‘s original composer Wynton Marsalis departed, it was a stroke of seditious genius for Singleton to call upon Williams, the master of noble Americana, to score the ironically labeled land of the free at its worst. Yet there’s still that stirring sense of nobility in how he captures the strength of Rosewood’s populace to stand up for their very survival while fleeing a hell-bent white mob out to destroy them for an imagined rape. Starting out with straight-up southern pastoralism for harmonica and guitar, with some bitingly restrained musical humor in its strumming, Williams’ score gets progressively more concerned before descending into anguished turmoil, and a pulse-pounding train ride that means life itself. Few composers can use strings to hit the melodic peaks of moral outrage, and ROSEWOOD is a lavishly surging gut punch of the highest order. Especially notable is the use of brass, its theme suggesting spirituals and period blues jazz, with a French horn the embodiment of heroism and anthemic mourning. Having captured the near-annihilation of another ethnic group with SCHINDLER’S LIST, it’s a given that an aching violin would also embody the tragedy at hand, and an even more brilliant musical coup that a blues solo piano so effectively captures the atrocity with its simple lyricism. Yet as awful as the subject might be, Williams can’t help but to find a ray of hope with a score that tells us how we’re ultimately better than our worst acts, while pleading to our heartstrings to make the madness stop.

Clink on the link to Purchase the ROSEWOOD soundtrack